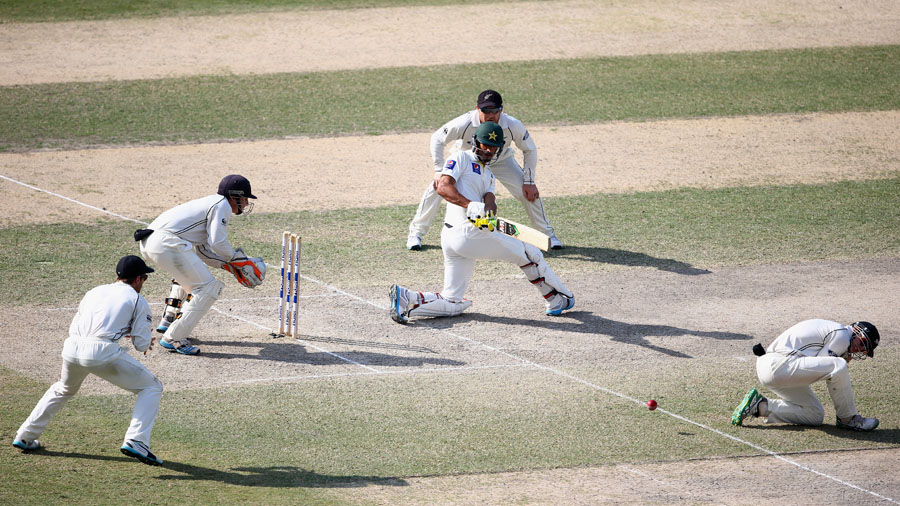 They are shaking hands. It’s a draw. A fair result one would think after five days of gruelling fight between the two teams. The game moved at a slow pace for the first three days before coming to life in the last two.

Superb innings from Sarfraz to bring Pakistan closer to New Zealand’s total in the first innings, then another excellent innings from Ross Taylor, who helped the visitors go for an aggressive declaration. Pakistan started the chase confidently but that mid-innings wobble broke their momentum.

New Zealand would have probably hoped for more from their spinners, who did not really make much impact on the fifth day, leaving a lot for Southee and Boult. But it was not to be. Excellent Test match overall.Pakistan lost three wickets for five runs after lunch but Younis Khan and Asad Shafiq prevented any further damage till tea. A further 28 overs remained, but with an extended first session and an hour-long lunch break on account of Friday prayers,

light was likely to come into play in the evening. Pakistan were set 261 to win in 72 overs as New Zealand declared an hour before lunch. They lost Taufeeq Umar in the second over of the chase when he nicked Tim Southee behind. Shan Masood and Azhar Ali dug in against the spinners, but Azhar provided New Zealand an opening when he cracked a Mark Craig full toss straight to extra cover on 24.

Kalabagh Dam Will Not be Forced on Sindh: Imran Khan

Kalabagh Dam Will Not be Forced on Sindh: Imran Khan