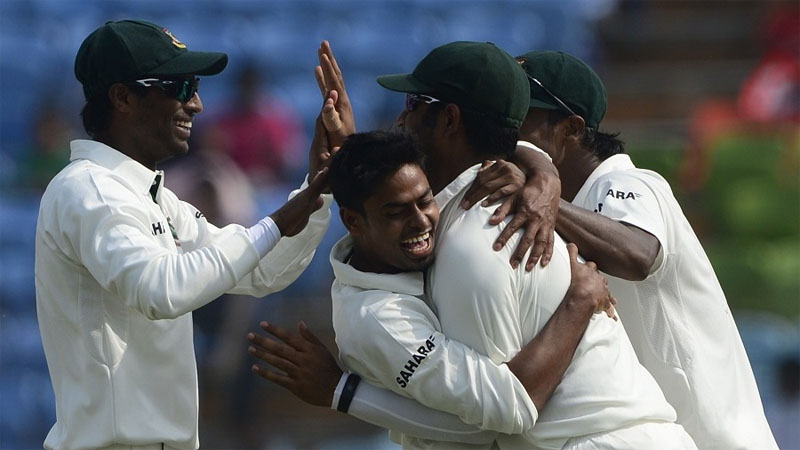 Shakib claimed 5-44 in the second innings to help bowl out Zimbabwe for 151, clinch the three-match series 2-0, and send Zimbabwe to the bottom of the test rankings. He had figures of 5-59 in the first innings as Bangladesh took a 65-run lead, cutting down Zimbabwe for 368.

Shakib, who hit 137 in the first innings, joined England’s Ian Botham and Pakistan’s Imran Khan to take 10 wickets and score a century in a test. Botham and Imran both accomplished the feat in 1980 against India. “I had my eye on taking 10 wickets and scoring a hundred. I was lucky,” Shakib said. “It wasn’t easy to score runs but difficult to get out, too, once you settled in. “It was turning a lot on the last day. I put the ball in the right areas and it worked. It’s a great feeling to lead a series 2-0 and hopefully we’ll keep on doing this in the future series as well.” Shakib’s rare achievement was complemented by fellow left-arm spinner Taijul Islam, 3-44, and legspinner Jubair Hossain, 2-42, as Zimbabwe was washed away by the spin-wave, losing its last five wickets for 14 runs.

Zimbabwe lost 18 wickets in the test to the three-pronged spin attack. Only No 3 batsman Hamilton Masakadza stood tall, following his career-best 158 in the first innings with 61 in the second. As long as he was at the crease on Friday, Zimbabwe had a glimmer of hope of drawing the match at least, after being set a target of 314. But Shakib sparked Zimbabwe’s collapse just after the tea break, dismissing Masakadza with one that got extra bounce and touched the shoulder of his bat to offer a simple catch at silly point. Masakadza stuck five fours and a six in his 113-ball stay, falling at 137-6. The next highest scorers were middle-order batsmen Regis Chakabva with 27, Craig Ervine on 21.

Bangladesh had Zimbabwe reeling on 15-3, dismissing openers Brian Chari (0) and Sikandar Raza (9), then captain Brendan Taylor for a four-ball duck. Masakadza and Chakabva combined in a 70-run stand for the fourth wicket until Jubair Hossain dimissed Chakabva with a googly. Jubair Hossan also had Ervine stumped just before tea to put Bangladesh on top heading into the last session. After resuming the final day at 201-5, Bangladesh declared its second innings on 248-9 just before the end of the morning session after legspinner Natsai M’Shangwe took four wickets for Zimbabwe in the session. He finished with 4-82. Mamudullah made 71,

Mominul Haque scored 54 and Shuvagata Hom posted his maiden test half century for Bangladesh before captain Mushfiqur Rahim declared. “It was a very good team effort, especially the stand between Mominul and Mahmudullah, and Shuvagata’s 50 later on,” Shakib said. “Taijul bowled very well and I did my part, too.” With the pitch predictably slow and low, Mushfiqur introduced spinners from both ends. Bangladesh scored 433 in its first innings riding on centuries by Shakib (137) and Tamim Iqbal (109). The third test starts at Chittagong on Wednesday. -supersport