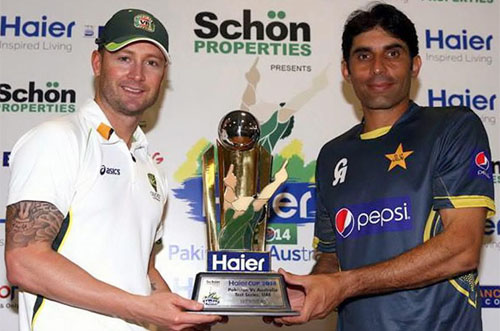 Pakistan and Australia lock horns in Test series as they face each other for first time in a Test at Dubai International Stadium Today (Wednesday).

Pakistan are desperate to arrest their losing run against the Australians at their ‘home ground’ after losing Twenty20 and ODI series.’ But the past and the present both are against them as they are searching for first Test series win against Australia since last 20 years.

They also have not won a Test series since 2012, when they beat the then top Test team England 3-0. Since then they have lost three and drawn three. In total, Pakistan have played Australia in 21 Test series winning five, losing 11 and five were drawn. Overall Pakistan have played Australia 57 time in the long version of the game winning just 12 Tests and losing 28 while 17 Tests ended in a draw. The last Test series between the two teams was played in England in which both teams shared the spoils by winning one and losing one.

However, it were Pakistan who emerged victorious in the last Test played between the two countries at Leeds. The visitors are also flying high on confidence having crushed England 5-0 at home last summer and upsetting South Africa 2-1 away in March.

Historically, bowling remains the X-factor for Pakistan for winning the matches in the past, but this time around they are depleted by injuries and suspension to their key bowlers. With Saeed Ajmal suspended and Junaid Khan and Wahab Riaz out with injuries, Pakistan boasted a relatively vulnerable and weak bowling attack.  In the absence of Ajmal, the bowling strength has been reduced to half and there will be pressure on the young bowlers, which was evident in the one-day series too. That pressure, though, can be reduced if Pakistan batsmen give an outstanding performance and inclusion of experienced players in the Test squad may give something to the bowlers to defend.  Former skipper Younus Khan is the leading run scorer at the ground, and is in the squad despite his recent fallout with the Pakistan Cricket Board over ODI selection.

He has two tons and as many half-centuries in 10 knocks here, averaging nearly 60. Also enjoying this venue are Azhar Ali and Misbah-ul-Haq, who round out the top three. Bowling-wise, Ajmal is the leading wicket-taker here by a very long way, but as he’s banned from bowling right now, so his Dubai statistics are irrelevant now. The next best player who will be able to take the field is M Hafeez, who has three wickets. Australia have never played a Test match here. The in-form Alex Doolan, though, welcomed a fine ton against Pakistan A in similar conditions in Sharjah, recently. Captain Misbah-ul-Haq will also be under pressure to score runs after managing nought and 15 in the preceding 3-0 one-day series defeat.

The team’s poor performances have led to pressure building on Misbah as he did not feature in the final ODI against Australia, with Shahid Afridi leading the team, causing massive speculation over the team’s captaincy for next year’s World Cup. He has also publicly set a criterion for himself to lead the team in the World Cup by earning it with performance with the bat.  The four-day match victory of Pakistan A has boosted the confidence of players and they can exploit some of Australia’s weaknesses against spin and reverse swing. Reverse swing in typically dry conditions will become instrumental. This was Ausrtalia’s downfall in the tour fixture last week – and might be a severely depleted host attack’s lone inroad this time. Australia will also be tempted to play two spinners including Nathan Lyon and Steve O’Keefe.

With their captain Michal Clarke fit to bowl and Steven Smith in their ranks, Aussie spin department can cause trouble to Pakistani batsmen under the guidance of their coach, Muralitharan.  Australia will also hope Clarke, top Test run getter in 2013 with 1,093, get back to his form who is short of match practice and scored just 10 and five in two innings against Pakistan A.

Allrounder Mitchell Marsh is also deemed to be fit and is considered to get Test debut. Australian pace attack will be led by Mitchell Johnson and it would be who bowled with venom in the two one-dayers he played – taking six wickets – and supported by Peter Siddle.