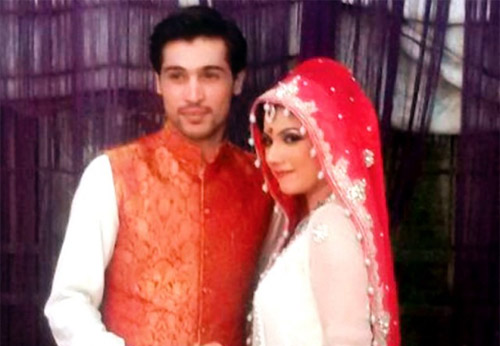 Marking an end to his short bachelorhood for a –hopefully– lifelong matrimonial bliss, the banned young Pakistani pacer, Mohammad Amir, was as  elated as he had clean bowled the whole rival team. Family sources confirmed that Amir had taken a young girl from Britian in wedlock in a strictly private ceremony.

Mohammad Amir bride, Nargis, is a British national of Pakistani origin. Their Nikah was performed lately, while Rukhsati (sending a bride off to live with groom) has been put off until next year”, sources told Samaa quoting a family member. To a question whether it’s an arranged or a love marriage, the reply of the sources was: ‘it’s both.’ “This is an arranged love marriage. In fact the couple found each other and then both the families cemented the bond with their mutual blessings”, the sources said further.[contentblock id=2 img=adsense.png]

Left-arm quick Amir was rated one of the best young talents in world cricket until his fall from grace in the notorious Lord’s Test against England in 2010. Amir, then 19, was hit with a five-year ban from cricket after he was caught in a tabloid newspaper sting along with captain Salman Butt and pace partner Mohammad Asif agreeing to bowl no balls to order. The ban is due to end in September 2015, when Amir said he would go back to the sport. -samaa