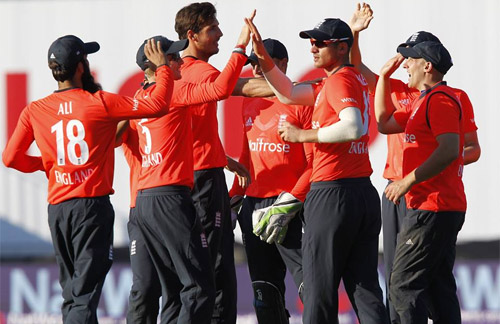 England wins a thrilling T20I against Indian by just 3 runs

South Africa-born Roy, who came to England as a child, was making his first international appearance in any format, with the 24-year-old earning selection after topping this season’s domestic T20 scoring charts with 677 runs at an average of 48.35 and a strike rate of nearly 160. India gave a T20 debut to leg-spinner Karn Sharma, also playing his first full international match in any format. Morgan was leading the side in the absence of injured all-rounder Stuart Broad.

This match is the final fixture of an India tour of England where MS Dhoni’s men lost the Test series 3-1 but won the subsequent one-day series by the same margin, despite England’s 41-run win at Headingley on Friday. England made three changes to that side, all-rounder Ravi Bopara replacing Ben Stokes, Roy taking the spot vacated by Alastair Cook, who doesn’t play T20 any more, and left-arm paceman Harry Gurney coming in for James Anderson. India, again led by Dhoni — their captain in all formats — omitted seamers Bhuvneshwar Kumar and Umesh Yadav, with Kahn Sharma and paceman Mohit Sharma coming into the side.

England were batting first under sunny blue skies and on a used wicket, which Morgan said he expected to deteriorate throughout the match. India thrashed England by nine wickets in the fourth ODI at Edgbaston on Tuesday, having previously beaten their hosts at the Birmingham ground to win last year’s Champions Trophy final. -samaa