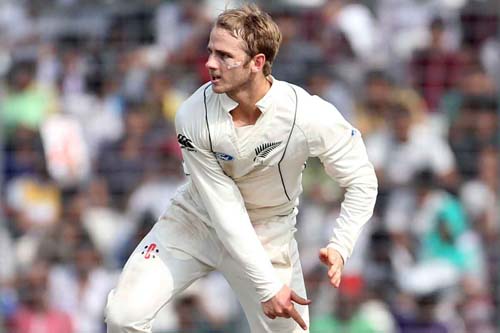 New Zealand batsman Kane Williamson has been banned from bowling his occasional off-spin in international cricket because of an illegal action, New Zealand Cricket said on Wednesday. Williamson was reported by the match officials during the second test against West Indies in Port of Spain in June and independent analysis confirmed that his elbow extension exceeded the 15 degrees permitted by the rules.

“I will concentrate on changing whatever’s necessary to return to the bowling crease,” Williamson said in a media release. “Clearly, the onus is on me to satisfy assessors as to the legality of my action, and I’m aware I have some hard work in front of me to achieve that goal. “It’s never nice, going through this sort of process but it will be worth it if I can manage to bowl again at international level.” Williamson, 23, has taken 24 wickets in 34 test matches, 23 wickets in 54 one-day outings and three wickets in 19 Twenty20 appearances for New Zealand.

The suspension will stand until he has submitted independent biomechanical analysis that satisfies assessors that his action is legal. “Kane’s disappointed, clearly – anyone in his situation would feel the same way,” said New Zealand coach Mike Hesson. “He now has a challenge on his hands if he’s to bowl again at the top level, but we’re very hopeful he can manage it.” REUTERS