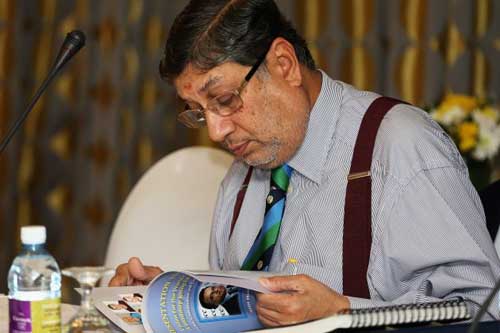 Narayanaswami Srinivasan was confirmed as the Chairman of the International Cricket Council (ICC) after the 52-member* Full Council approved amendments to the ICC’s Memorandum and Articles of Association at the Annual Conference in Melbourne on Thursday. Mr Srinivasan has been nominated by the Board of Control for Cricket in India (BCCI) for the top position and will assume charge following the conclusion of the ICC Annual Conference week.

The approval of the constitutional changes, which flowed from an ICC Board resolution taken in Singapore on 8 February and finalised on 10 April, also means that a new Executive Committee was formed, which will report to the ICC Board. The initial Chair of the Executive Committee will be Cricket Australia’s Chairman, Wally Edwards, while the Chair of the ICC’s Finance and Commercial Affairs Committee (F&CA) will continue to be England and Wales Cricket Board’s Chairman, Giles Clarke. Mr Srinivasan said it was an honour to become ICC Chairman and promised that the ICC will continue to play a leading role in the promotion and development of the global game. “It is an honour to be confirmed as the Chairman of the International Cricket Council,” said Mr Srinivasan, adding:

“I will leave no stone unturned in trying to strengthen the pillars and foundations of our sport, both on and off the field. I want to ensure that cricket retains and grows its popularity, and that the ICC plays a leading role in this global growth. “I want to see more strong teams in international cricket. For this to be achieved, we all need to work hard to develop local talent in our countries. Naturally, there will be more support to those who first show they can help themselves. “The ICC is a Members’ organisation and the pathway is now there for any Member to play Test cricket or in the major ICC events if it performs well enough over a sustained period of time.”

Narayanaswami Srinivasan congratulated outgoing ICC President Alan Isaac for his contribution. “Mr Isaac has been an inspirational President of the ICC. He provided guidance to everyone during his two-year term and all three international formats remain incredibly popular. The game is unquestionably stronger than it was at the start of his term,” said Mr Srinivasan. The Annual Conference also saw Mr Mustafa Kamal become the 11th President of the ICC. Mr Kamal said: “This is a memorable and historic day for Bangladesh cricket. On this day 14 years ago, Bangladesh became the 10th Test playing country.

Today, a Bangladeshi becomes the 11th President** of the International Cricket Council. Thank you for bestowing this honour on Bangladesh and me. “Over the next 12 months, I look forward to working with the ICC Board and ICC Management, and will be delighted to contribute in any way I can. In Mr Srinivasan and David Richardson, I have absolute trust and confidence that we have a combination that will not only strengthen our sport, but will also take this great organisation to a new level.” From 2016, the ICC Board, which will continue to be the primary decision-making body, will elect the ICC Chairman for a two-year term. The ICC Board confirmed that the USA Cricket Association (USACA) is the ICC’s recognised member in the USA.

The West Indies Cricket Board (WICB) and ICC management will, however, continue to work with USACA and other interested stakeholders to assist in overcoming some challenges currently facing the governance and development of the game in the USA. The ICC Board also approved the Development Committee’s recommendation that Oman Cricket (OC) becomes the 38th Associate Member of the ICC. However, Affiliate Membership of Brunei was suspended, while Tonga was removed as an Affiliate Member. The ICC now has 105 members. The ICC Board also noted the Associate and Affiliate Members’ decision, which re-elected Imran Khawaja and Neil Speight for another two years as their representatives on the ICC Board, while Keith Oliver was replaced by Francois Erasmus. -icc-cricket