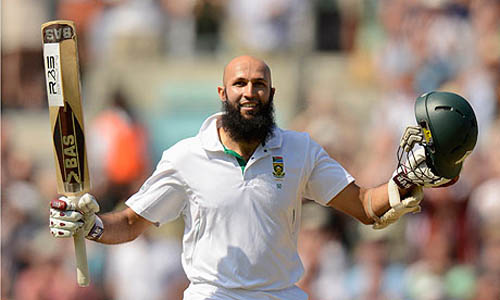 South African star batsman Hashim Amla was named the country’s Test cricket captain on Tuesday, replacing retiring Graeme Smith who led the side for a decade. A “glad and humbled” Amla said he would give all his heart to the role, as the Proteas try to rebuild after the departure of opener Smith and legendary all-rounder Jacques Kallis.

“Throughout the years I have concentrated mainly on my batting, trying to become the best batsman possible and hopefully I can still get there,” Amla said. “But now I do feel it is time to act, to contribute in a team environment,” he added. Amla, 31, who made his test debut against India in Kolkata 10 years ago, praised the work done by his predecessor, whose legacy looms large. “I have to pay tribute to Graeme Smith and his leadership over the 10 years that I have been involved, there was certainly a lot of value that he added.” Smith had captained South Africa in a world-record 109 Tests before announcing his retirement during the third and final Test against Australia last March. Selectors said his replacement had been seen as a choice between three world class batsmen – Amla, AB de Villiers and Faf du Plessis.

“There were some strong contenders,” said selector Andrew Hudson. But it was Amla, a devout Muslim who has often shied away from the public eye, who won out. While praising Smith, Amla said he would be his own man. “One thing I have learnt in international sport is that you don’t try to copy anybody, generally you find that the guys who try to copy are not as successful,” he said. “The way I try to approach my game is to try to be as natural as possible, to find what intrinsically works for me.” He said this focus would be on putting together a “winning combination” that can return South Africa to the top of the Test rankings. Hashim Amla captained the South African team at the Under-19 World Cup in New Zealand in 2002 and was appointed captain of the Dolphins franchise early in his first-class career.

He resigned as captain after one season to concentrate on his batting. Amla was appointed De Villiers‘ vice-captain of the South African ODI team in 2011 and led the side in three matches, but gave up the job last year. He was reappointed to that position on Tuesday and his first assignment will be to lead South Africa in two Tests in Sri Lanka during July. “A two Test series in Sri Lanka, make no mistake about it, is quite a challenging series,” said Amla. “Not many teams go to Sri Lanka and dominate, they are a very resourceful team and play really well in their conditions.”