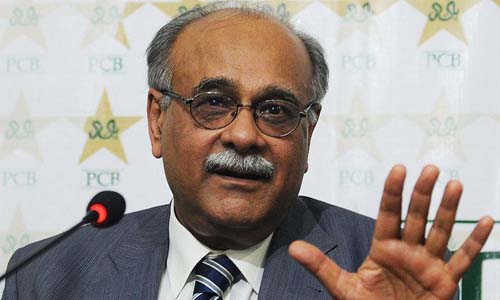 Najam Sethi back again for the third time

The Supreme Court suspended the decision to reinstate Zaka Ashraf as the Pakistan Cricket Board chairperson and restored Najam Sethi as the head of the body on Wednesday.

As directed by the acting Chief Justice Nasirul Mulk, a three-member bench of the top court headed by Justice Anwar Zaheer Jamali heard the case today. On May 17, the IHC had reinstated Ashraf as the chairperson of the body. Justice Noorul Haq had termed Ashraf’s removal last January illegal, besides questioning the formation of the management committee that worked in Najam Sethi chairmanship. Three days later, the government had appealed to the Supreme Court on May 20 to reinstate Sethi as the head of the PCB. The Ministry of Inter Provincial Coordination, which oversees sports affairs in the country, had filed the petition challenging the Islamabad High Court’s (IHC) January 17 judgment through its counsel Asma Jahangir. In its petition, the government had expressed apprehension that the high court’s judgment will “ruin the game of cricket”.

The government had also requested the Supreme Court to restore PCB Management Committee (MC). For the sixth time since May 2013, the board saw the reinstatement of a chairperson after he was sent packing on legal grounds. Zaka Ashraf was reinstated and then removed from the post three times while Sethi is now at the top spot for the third time. Ashraf was suspended in May 2013 by the IHC after it ruled he had been elected via a dubious process which was carried out during a meeting of the governing body. However, after a complicated legal process, he was reinstated by the same court on January 15, 2014, before Nawaz Sharif dismissed him again on February 10, bringing back in his place Sethi.

Najam Sethi back Again for the Fourth Time PCB by thetimesofpakistan