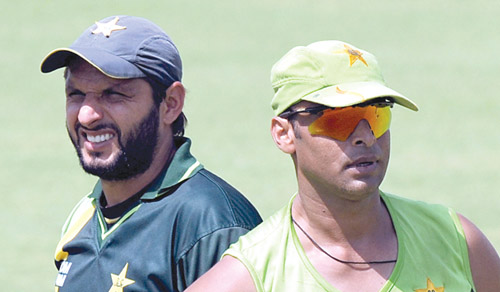 Former Pakistani bowler Shoaib Akhtar has said that Shahid Afridi should be the captain for next world cup as he has the potential to lead the side to success.

Talking to Private news channel Shoaib Akhtar said that Shahid Afridi is not regular batsman but his credentials as bowler and aggression in his attitude is the key factor for him to qualify as a captain. Shoaib Akhtar added that the coach should understand how to take the best out of each and every individual in the team. To a question, he said that Waqar Younis would bring changes beneficial for Pakistan team in the future. He as a coach has to rise above everything and act as father figure in the dressing room, he said.

He said that a cricketer of Waqar Youniss stature would be able to help Pakistan team overcome the problems and grab victories in the future. He stated that the current Pakistani team has the potential to at least reach in the final of the Cricket World Cup 2015. However, he said that it is going to require a lot of effort since the competition is immense especially with new teams entering the pool this time. -thenews

Blast near railway track in Bolan