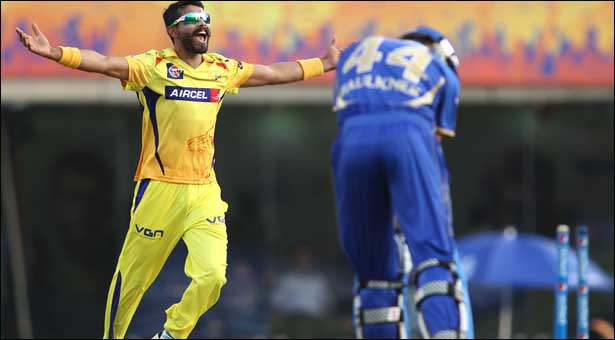 Chennai Super Kings beat the Rajasthan Royals by five wickets in their Indian Premier League (IPL) 2014 contest at the JSCA International Stadium, Ranchi. Chennai had done well to restrict Rajasthan to 148, and were cruising in their run-chase. But then things got tight and that man again, MS Dhoni took Chennai home in a last over finish.

On a slow surface at Ranchi, Shane Watson won the toss and chose to bowl. There were numerous changes in the side it was quite surprising when Ankit Sharma, who came in for Rahul Tewatia, opened the batting with Watson. Ajinkya Rahane and Karun Nair, Rajasthan’s preferred opening pair went down to No 3 and No 4 respectively. Initially, Ankit struggled but then found his footing with a few big shots off Ravichandran Ashwin. He was sent to play his shots and was slogging across the line. As Watson got his eye in, Ankit helped Rajasthan get to 42 in the powerplay. After, he was dismissed, Watson got going and smashed the ball around quite well. Vijay Shankar’s only over went for 19 as Watson raced to his fifty off 36 balls. However, once he was dismissed in the 13th over, Rajasthan lost momentum.

Chennai bowled very well in the last ten overs. In the 7.1 overs after Watson’s dismissal, Rajasthan scored 49 runs. Ravindra Jadeja recorded a remarkable two for 16 and Mohit Sharma finished with three for 31. They played a crucial role in breaking Rajasthan’s momentum and restricting them to 148. In reply, Chennai started very well with Dwayne Smith smashing the ball around. Brendon McCullum and Suresh Raina fell early, but Smith continued to find the boundaries and raced to 44 off 35 balls. Both Raina and McCullum were dismissed by Ankit, who opened the bowling and finished his spell upfront to record two for 20.

Smith was dismissed by Kevon Cooper in the tenth over, and then Chennai slowed down. Bizarrely, Ashwin was sent in at No 5 and Chennai couldn’t get going. Faf du Plessis also struggled and was injured while trying a run. At the death, it became tight as Rajasthan hit back by dismissing Ashwin and du Plessis and Dhoni was in the middle, before his home crowd. It ultimately boiled down to 25 to get off the last two. Cooper bowled the penultimate over and Chennai could manage 13 with Jadeja hitting a six. With 12 needed off the last over, Chennai got there with Dhoni keeping his cool and finishing the game. -thenews