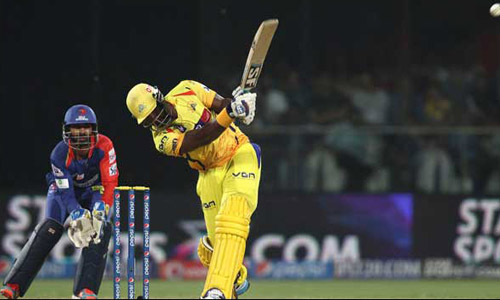 Chennai Super Kings comfortably beat Delhi Daredevils by eight wickets in an IPL match at Feroz Shah Kotla, Delhi. Batting first Daredevils scored 178 for five which CSK surpassed with two balls to spare. Dwayne Smith was the top scorer with 79 off 51 balls while Suresh Raina and Brendon McCullum scored 47 not out and 32 respectively.

Starting off on a good note, Delhi openers Quinton de Kock and Murali Vijay accumulated 34 runs in the first four overs. However, the partnership didnt last for long. It was time for de Kock to leave the pitch after he was run out. He made 24 runs off 16balls (3×4 2×6). Kevin Pietersen was the next in line. In the very same over, Pietersen was handed a duck as he was bowled by Sharma. DD were at 37/2 in 5 overs. Murali Vijay and Dinesh Karthik propeled Delhi to 103/2 in 12.3 overs after some brillaint shot making.

Dinesh Karthik though unfortunately got out on the final ball of the 13th over. There was some confusion regarding the catch before third umpire declared him out. His innings was laced with 4 fours and 3 sixes as he made 51 runs off 36 balls. Within two overs, Delhi lost two wickets right after Karthik’s departure. LR Shukla got a duck as he was caught out by Pandey, bowled Ashwin. Shortly after his departure, Murali Vijay was dismissed caught by du Plessis, bowled Jadeja. Vijay made 35 runs off 30 balls (2×4 1×6). Delhi Daredevils were at 130/5 in 16 overs.

Duminy played some spectacular shots. With four consecutive fours, he propelled Delhi Daredevils to 151/5 in 18 overs. Jadhav ended Delhi Daredevils innings on a high with 2 sixes and a four. While Duminy made 28 runs off 17 balls, Jadhav shone with 29 off 18. DD made 178/5 in their innings against Chennai Super Kings. Brendon McCullum and Dwayne Smith gave Chennai Super Kings a decent start as the duo gathered 15 runs in 2 overs. A spectacular show by Smith, as he hit three consecutive sixes, taking CSK to 47/0 in 5 overs.

With some wayward bowling, Delhi Daredevils proved no match for Chennai Super Kings. While the former continued to squander runs, CSK gathered 52 runs with no loss at the end of 7 overs. While CSK was looking to keep wickets in hand, Delhi Daredevils tightened their fielding. The reason could be KP’s pep talk during the break. CSk were 78/0 in 11 overs. Shukla provided the first breakthrough to Delhi Daredevils as he got McCullum out. This was the result of the pressure building by Delhi bowlers. He was caught by Vijay after he made 32 runs. CSK were 92/1 in 12 overs.

The next in order was Suresh Raina. He smashed boundaries in order to keep the CSK scoreboard ticking. Chennai were at 103/1 in 13 overs. Smith scored a fifty in just 38 balls, which was also his fourth one in IPL 7. In the same over, Smith smashed a four followed by a six. CSK were at 116/1 at the end of 14 overs. Parnell finally did the trick for Delhi Daredevils. Smith failed to clear the boundary as Murali Vijay took a fantastic catch to send Smith home thus ending his fantastic innings of 79 runs off 51 balls. CSK were 168/2 in 19 overs. Dhoni hit the winning runs as Chennai Super Kings beat Delhi Daredevils by 8 wickets. –thenews

PCB-contracted Players get Increase in Pay