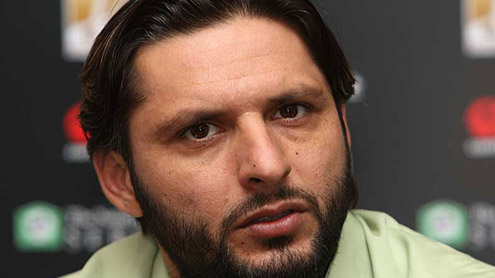 The Pakistan Cricket Board (PCB) has issued a show-cause notice to all-rounder Shahid Afridi in connection with the statements made by him to the media at Karachi’s Quaid-i-Azam International Airport last week.

The all-rounder, in his chat with the media upon his arrival from Dhaka, censured Pakistan team’s poor show in the important World Twenty20 match against the West Indies which saw the greenshirts crashing out of the tournament. During his interaction with the media, Shahid Afridi also expressed willingness to accept the post of national T20 captain which is being considered as infringement of PCB disciplinary rules. According to sources, the show cause notice has been issued to the all-rounder after lot of consultation within the board and to thwart the pressure that came from some of the ‘high-ups’ in the federal government regarding elevation of Shahid Afridi as the next T20 skipper following the resignation of Mohammad Hafeez. -Dawn