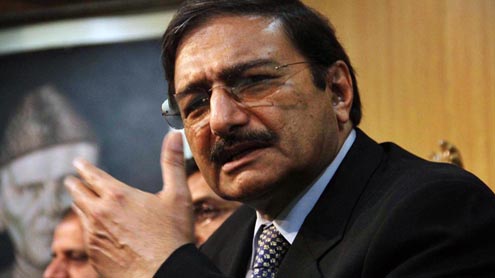 Former Pakistan cricket chief Zaka Ashraf confirmed an offer by India to join the so-called “big three” during a major reorganization of the game’s administration.

The Pakistan Cricket Board (PCB) was initially one of three countries which opposed the revamp of the International Cricket Council (ICC) approved by members in February. The move handed the majority of the powers and revenues to the “big three”of the game — India, Australia and England. Pakistan and Sri Lanka abstained from voting on the reforms, but since then Sri Lanka have hinted they will sign the draft.

Reacting to the claims by current PCB chairman, Najam Sethi, who said Pakistan were offered a seat at the table but declined, Zaka Ashraf confirmed an offer was floated at one stage but said it was never a firm commitment. “They did offer us to join the group but when I went to attend the ICC meeting in February India stepped back from its offer, claiming two other members of the body — Australia and England — are not ready to admit Pakistan as a fourth member,” Zaka Ashraf said.

“Whatever India offered us was not on paper and we could not have taken those verbal assurances,” he added told reporters. Pakistan’s Prime Minister Nawaz Sharif sacked Ashraf two days after the “big three” reforms were approved, reappointing Sethi who himself was suspended by Islamabad high court in January over alleged irregularities in his appointment.

Sethi, who will attend the ICC meeting in Dubai on April 9-10, said his main aim now was to revive ties with India. India have not played a full bilateral series with Pakistan since the 2008 terror attacks on Mumbai. Pakistan toured India for a brief limited-over series in December 2012-January 2013. The ICC meeting is set to discuss the legal perspectives of the proposed governance model. -Dawn