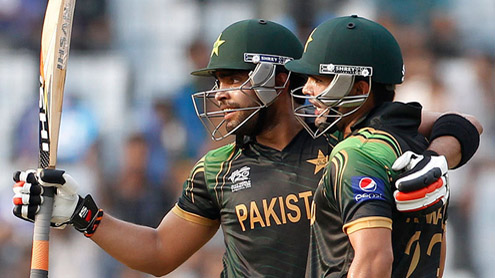 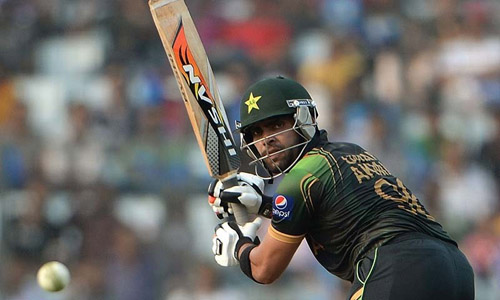 Umar Akmal smashed 94 off 54 balls as Pakistan bounced back after a morale-sapping loss against India to defeat Australia by 16 runs in the World Twenty20 in Dhaka on Sunday. Elder brother Kamran Akmal contributed a run-a-ball 31 and Shahid Afridi returned unbeaten on 20 off 11 balls to lift Pakistan to 191-5 after they were sent in to bat. Australia were bowled out for 175 in reply off the final ball of the match despite a spectacular third-wicket partnership of 118 from 64 balls between Glenn Maxwell and Aaron Finch.

Maxwell hit 74 off 33 balls with six sixes and seven boundaries, while Finch chipped in with 65 that included two sixes and seven fours. The pair came together after 35-year-old left-arm spinner Zulfiqar Babar, who opened the bowling, dismissed David Warner and Shane Watson in the first over to make it 8-2. Maxwell and Finch launched a brilliant counter-attack to raise Australia’s 100 by the eighth over, with Maxwell contributing 58 off 20 balls. Seamer Bilawal Bhatti conceded 30 runs in the eighth over, giving away two sixes and three fours, besides bowling a waist-high full toss that fetched five extra runs. 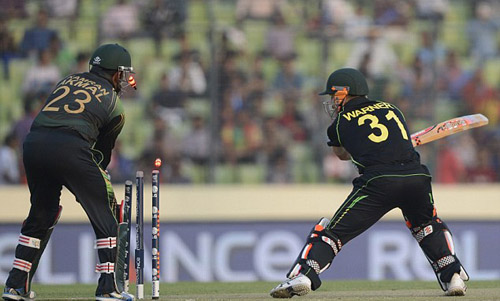 A relieved Pakistan finally saw Maxwell off in the 12th over when he attempted to sweep Shahid Afridi and holed out to Ahmed Shehzad on the square-leg fence. Afridi also bowled skipper George Bailey for four as Australia lost their last seven wickets for 29 runs. It was Australia’s first group two match in the Super-10 stage, while Pakistan had lost to India by seven wickets on Friday. India, the West Indies and hosts Bangladesh are the other teams in the group, from which the top two will advance to the semi-finals. Pakistan captain Mohammad Hafeez said the plan to attack from the start paid off. “I think were a bit defensive against India, but today the boys went out and expressed themselves,” said Hafeez. 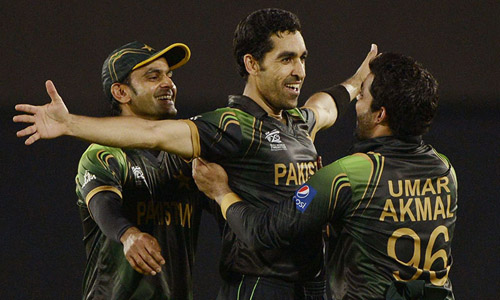 “Umar Akmal showed his real talent today.” “We wanted him to attack and that’s what he did. It is really nice to have a win under our belts. It will give us the confidence for the matches to come.” Australian skipper George Bailey said poor catching let his team down. “Batting and bowling can go either way, but fielding was in our hands,” he said. “We’ve set high standards and we didn’t do well today.” “Pakistan bowled really well and did not allow us to build the momentum that Maxwell and Finch created.” The Akmal brothers put on 96 for the third wicket after Pakistan were reduced to 25-2 by the fifth over, losing the key wickets of Ahmed Shehzad and Hafeez. 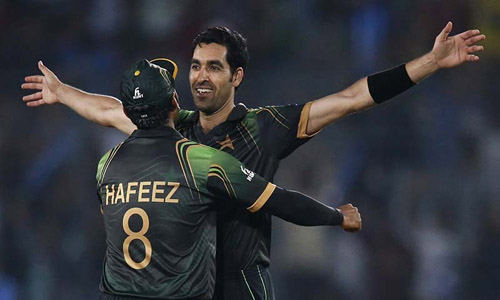 Umar Akmal hit four sixes and nine boundaries before he fell in the final over, caught on the fence attempting another big hit off Mitchell Starc. Australia’s 43-year-old spinner Brad Hogg, the oldest player ever in the World Twenty20 competitions, had a forgettable outing. Hogg dropped Umar Akmal on the mid-wicket fence when the batsman was on 22 and then conceded 29 runs in three wicketless overs after being called on to bowl in the ninth over.Kamran Akmal, who was also dropped early in the innings, was finally dismissed in the 13th over when Warner held a running catch on the point fence off the bowling of Nathan Coulter-Nile. -Dawn

US landslide Death toll Doubles to 8

US landslide Death toll Doubles to 8