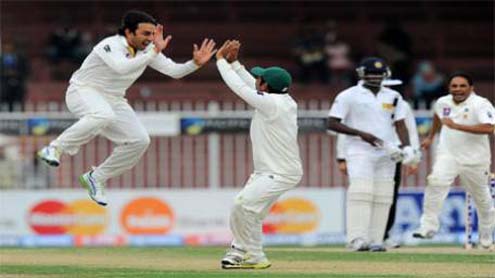 SHARJAH: Pakistan grabbed the prized wicket of Mahela Jayawardene to press their advantage for a series-levelling win over Sri Lanka in the third Test in Sharjah on Sunday.

Off-spinner Saeed Ajmal removed Jayawardene for 46 near stumps on the fourth day after an exciting tussle between the bat and ball as Sri Lanka finished at 133-5. They now lead by 220 runs with five wickets in hand and a full day’s play to retain their 1-0 lead.

They won the second Test in Dubai by nine wickets after the first ended in a draw in Abu Dhabi. At the close Angelo Mathews was unbeaten on 14 and with him Prasanna Jayawardene was on six not out.

Jayawardene and Mathews had frustrated Pakistan in the last session through their slow-paced 38-run fifth wicket stand and when it seemed both will see off the day, Ajmal had Jayawardene caught at short-leg. Ajmal could have had Prasanna caught behind off his gloves on nought but wicketkeeper Sarfraz Ahmed failed to hold the catch, much to Pakistan’s desperation. Pakistan coach Dav Whatmore said his team will go for the win. “It will be an interesting fifth day,” said Whatmore, under whose two-year tenure Pakistan didn’t win a Test series.

“We need five wickets quickly,” said Whatmore, whose term ends after this match. Sri Lankan paceman Shaminda Eranga said Sri Lanka will look for more runs. “Obviously, we will look to build partnership and increase our lead to get out of danger,” said Eranga. Jayawardene, who struck 129 in Sri Lanka’s nine wicket win in the second Test in Dubai, swept Ajmal over deep square-leg for a six to complete 11,000 runs in his 141st Test.

Jayawardene hit four boundaries and a six during his defiant knock. Pakistan did waste a golden chance of removing Mathews when Khurram Manzoor dropped an easy chance at extra cover off paceman Junaid Khan. Mathews was then on 11.

It was Rehman (2-36) who raised hopes for Pakistan by dismissing experienced Kumar Sangakkara (eight) and Kaushal Silva (36) in the post lunch session, leaving Sri Lanka precariously placed at 66-3. It became 89-4 when Dinesh Chandimal (13) was bowled by Talha, who took 2-36, soon after tea, but Jayawardene and Mathews ensured Sri Lanka did not panick.

Pakistan had removed opener Dimuth Karunaratne for eight, bowled by Talha as Sri Lanka reached 19-1 at lunch. Earlier, Pakistan were bowled out for 341 in their first innings, 87 short of Sri Lanka’s first innings total of 428 for nine declared.

Skipper Misbah-ul Haq scored 63 to notch up his 24th Test half-century before holing out to left-arm spinner Rangana Herath who finished with 5-125. Paceman Shaminda Eranga removed Abdul Rehman (two) and Talha (two) after Pakistan resumed on 291-6, searching for quick runs. Eranga bettered his 4-65 against Australia in Colombo in 2011. dailytimes