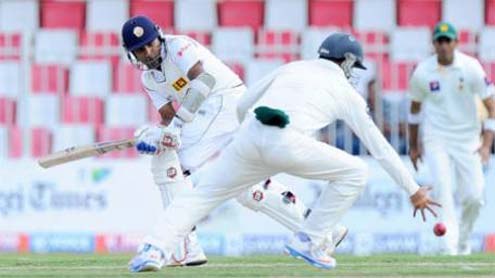 SHARJAH: Sri Lanka battled hard against Pakistan’s spinners led by Saeed Ajmal to reach 220-5 at close on the opening day of the third Test in Sharjah on Thursday.

Ajmal took 2-62 to leave Sri Lanka struggling at 166-5 before Angelo Mathews (24) and Prasanna Jayawardene (28) saw off the day with a 54-run unfinished stand on a spin-friendly Sharjah stadium pitch. Pakistan were left to rue a dropped catch by paceman Mohammad Talha when Mathews had yet to get off the mark, while a leg-before decision against Prasanna was turned down on referral – two lapses which denied Pakistan the chance to take full control.

Pakistan took the second new ball after 87 overs with Sri Lanka on 206-5, but Mathews, who hit a career best 157 not out, and Prasanna, who helped Sri Lanka to salvage a draw in the first Test in Abu Dhabi, batted sensibly. Sri Lanka lead the three-match series 1-0 after winning the second match in Dubai by nine wickets. The first Test ended in a draw. Spinner Abdul Rehman admitted Mathews catch had made a big difference.

Pakistan grabbed the key wickets of Kumar Sangakkara (52) and Mahela Jayawardene (47) on either side of tea. Sangakkara flicked a straight drive into the hands of mid-wicket from paceman Junaid Khan, two balls after completing his half-century. The left-hander could have been dismissed on 14 when he gloved a miscued sweep to Younis Khan at slip off Rehman, but Indian umpire Sundaran Ravi turned down a vociferous appeal.

Unfortunately Pakistan did not challenge the decision while television replays showed the ball had hit the batsman’s glove.

Sangakkara took full advantage of the lucky escape, hitting Junaid for his fifth boundary to reach his 44th half-century but perished soon after. Jayawardene, who hit 129 in Sri Lanka’s nine wicket win in the second Test in Dubai, hit two sixes and five boundaries during a 108-ball knock but edged a turning ball and was smartly caught at short-leg. Dinesh Chandimal did not stay long at the crease, as he miscued a drive off Ajmal and was caught by a running Asad Shafiq at mid-on after making 11.

Pakistan had a good start as they removed both Sri Lankan openers Kaushal Silva (17) and Dimuth Karunaratne on either side of lunch. Paceman Mohammad Talha forced an edge off Silva in his second spell to leave Sri Lanka on 31-1. Silva – who has made 81, 95 and 58 in the series – hit one boundary. Left-hander Karunaratne hit two boundaries and a six before he edged left-arm spinner Abdul Rehman in the first over after lunch and was caught by Younis Khan in the slips.