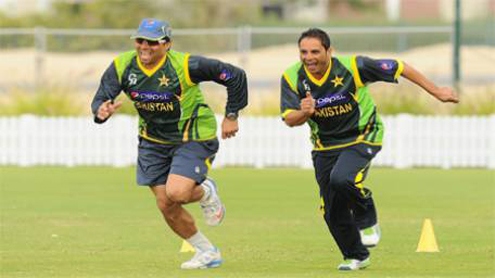 DUBAI: Pakistan are hoping for a wicket that takes turn to give their spinners an edge in the second Test against Sri Lanka starting Wednesday in Dubai.

It was the first time in Ajmal’s 31-Test career that the 36-year-old had bowled more than 17 overs in a second innings and finished wicket-less. Ajmal has taken 24 wickets at Dubai Stadium, including seven against England, which helped Pakistan inflict a 3-0 series defeat on the then-world number one team in 2012. Pakistan captain Misbahul Haq is hoping his spinners get more help from the pitch in Dubai for the second of three Tests. “It was a sort of a setback for both teams as regards spinners in Abu Dhabi, but I think the Dubai wicket will be different and spinners will get turn on the third day,” he said.

Pakistan beat Sri Lanka by nine wickets in Dubai on their way to a 1-0 series win in 2011. In that game Ajmal took eight wickets and Abdul Rehman four. Left-arm spinner Rehman is likely to replace fast bowler Rahat Ali, who went wicket-less in the first Test. Despite hundreds from Misbah and Younis Khan last week, Pakistan will also look to bolster their batting after they slumped from 329-4 to 383 all out in their first innings in Abu Dhabi.

“We need to work on our batting more as we should have got 450-odd runs on the board to have a big lead to put pressure on the opposition,” said Misbah. Pakistan have the option of replacing opener Khurram Manzoor with Shan Masood. The recalled Sarfraz Ahmed will keep wicket after Adnan Akmal had to return home following a fractured finger in the first Test.

Sri Lanka have summoned one-day opener Kusal Perera after Lahiru Thirimanne failed to recover from an ankle injury. They have not sought a replacement for paceman Nuwan Kulasekara, who returned home with a hamstring injury. Sri Lanka will be counting on the vastly experienced Mahela Jayawardene to come good after he failed in the first Test, managing five and nought. Spinner Rangana Herath will also look for more rewards after getting just four wickets in Abu Dhabi.

And off-spinner Sachithra Senanayake will try to secure his place in the side after getting support from his skipper. “We all know Sachithra is a good spinner.

Playing in his first Test, it was not easy playing on a pitch like this,” said Mathews after Senanayake went wicket-less in Abu Dhabi. Mathews, who scored 91 in the first innings before his unbeaten century in the second, was delighted with his own form.