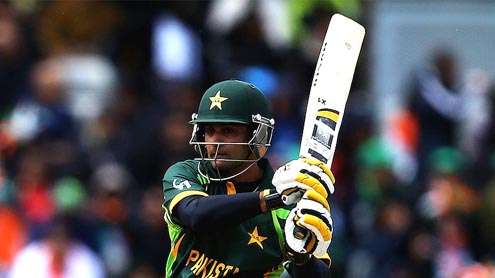 KARACHI: Acting Chairman of Pakistan Cricket Board (PCB), Najam Sethi, reiterated on Sunday that the fate of Mohammad Hafeez’s captaincy for the ICC World Twenty20 was solely in the hands of the national selectors while adding that he was aware that “people” were not happy with the allrounder performances.

“I am not an expert on the cricketing matters and it up to the selectors to decide about his [Mohammad Hafeez] fate as captain,” Sethi told reporters in a news conference at a local hotel “People are not happy with Hafeez’s captaincy. But I cannot make a change without the selector’s advice. Pakistan needs to groom captains for a long-term basis by looking at players’ leadership qualities,” Sethi added.

“What happens next I don’t know.”

Sethi said Misbah-ul-Haq’s captaincy leadership had also come under threat but the 39-year-old had silence all his critics with first his bat and then by winning an ODI series in South Africa, making Pakistan the only Asian side to have done so.

“After good results against South Africa in South Africa, he (Misbah) restored confidence in him,” Sethi said. The chairman all requested the media not make headlines out of his comments on Hafeez as no decision had been taken on the player’s fate.

“No where in the world cricketing issues are decided by administrators.”

He also defended the selection of teenage left-arm paceman Usman Shinwari, a decision which was widely panned by experts and the media. Shinwari, according to the chairman, was selected in the team on the recommendation of Pakistan Test and ODI captain Misbah who was impressed with the teenager’s fiery spell of five wickets for nine runs in the final of the T20 Cup for Departments.

“Misbah found him unplayable and wanted him in the T20 squad,” he pointed out.

Selector Salim Jaffar also defended the selection while reminding reporter of Pakistan’s tradition of blooding youngsters on the big stage. He said Shinwari would be groomed by including him in the Pakistan “A” teams. Najam Sethi said he was keen for cleansing in the board to make it viable.

In a veiled attack at former PCB chairmen, Sethi concluded the press conference by declaring he was going to cleanse the board of corruption. “I think we can run the PCB with 60 people instead of 960 employees,” Sethi said. – Dawn