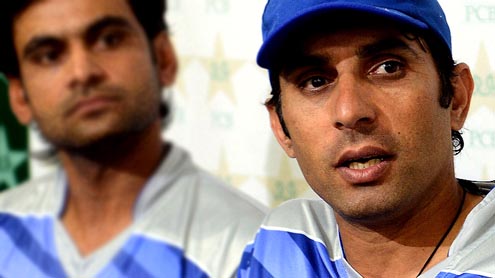 Playing matches constantly away from home is taking a psychological toll on Pakistan’s players, captain Misbah-ul-Haq said on Monday in urging cricket’s governing body (ICC) to reinstate internationals in his country.

No international teams have toured Pakistan since the 2009 attack by militants on the Sri Lanka team bus in Lahore, leaving Pakistan to host all their home matches at neutral countries. “You look at the example of England batsman Jonathan Trott recently and you can imagine what our players are going through… playing away from home constantly for the last five years is taking its toll on the players,” he said on a television talk show.

Trott is on an indefinite break from cricket after ruling himself out of the ongoing Ashes series in Australia with stress-related issues. Misbah pointed out that many players struggled to be away from home and their families for long periods of time.

“It is not easy for the players to be playing away from home for the last five years and it has got its psychological consequences and it has also stopped the growth of our cricket,” Misbah added. “In a way we can take pride in the fact that despite all these hardships our players have still managed to perform well against all opposition.” -Dawn