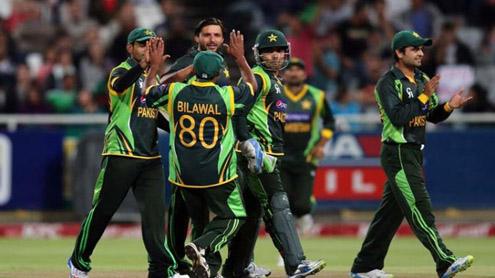 Dale Steyn’s heroics went in vain as South Africa lost a thrilling encounter against Pakistan by one run in the second One-Day International (ODI) at Port Elizabeth on Wednesday.

With this victory, Pakistan took an unbeatable lead of 2-0 in the three-match series. Chasing 263 to win, opener Hashim Amla led the chase for the hosts with a well-constructed 98 off 131 balls. Even though South Africa lost the wicket of Graeme Smith early in the innings, Amla joined forces with Quinton de Kock to add 85 runs for the second wicket. The wicketkeeper-batsman was dismissed for 47 after Pakistan skipper Misbah-ul-Haq took a stunning catch at mid-wicket. In order to up the scoring rate, skipper AB de Villiers took charge and blasted his way to a 45-ball 74. His knock included eight boundaries and two sixes.

The match headed to a close finish with nine runs needed off six balls. It narrowed down to six runs off the last delivery. However, the hosts could just manage to get four runs off a leg bye, to fall two runs short of the target. Earlier in the day, Steyn finished with career-best figures of six for 39, his third five-wicket haul in ODIs. Ahmed Shehzad slammed his third ODI ton. He struck a fluent 112-ball 102 which included eight boundaries and two sixes. South Africa skipper de Villiers won the toss and put the visitors to bat first after rain delayed start of play and the match was reduced to a 45-over encounter.

The hosts drew first blood in the opening over of the innings as Steyn rattled Nasir Jamshed’s stumps with a vicious incoming delivery that sneaked through the gap between the bat and pad. Mohammad Hafeez’s poor form too continued with the bat as he managed to score just eight runs before finding a faint edge that was safely taken by the wicketkeeper. It was the 15th times that Hafeez fell to Steyn in 21 occasions across formats. However, Shehzad looked in good touch and he continued to pile runs in company of Shoaib Maqsood. The duo put on 124 runs for the third wicket.

Skipper Misbah-ul-Haq too gave the opener good company, before Pakistan lost both the set batsmen and were reduced to 180 for five by the 35th over. At this point in the innings, Shahid Afridi joined Umar Akmal in the middle. The hosts managed to up the scoring rate, but lost the wickets of Afridi and Biolawal Bhatti in quick succession to Steyn. Howver, Akmal continued to plunder useful runs towards the end of the Pakistani innings. Steyn returned to bag two more wickets and end with career best figures. During the course of the innings, Anwar Ali was declared out for obstructing the field. Fast bowler Junaid Khan bowled an excellent last over to steer Pakistan to a sensational one run victory over South Africa in the second  one day international here on Wednesday.

Pakistan gained an unasailable 2-0 lead in the three match ODI series, thus sealing a first ever triumph in a limited overs rubber against South Africa. South Africa needed 8 runs in the last over with six wickets standing, but Junaid Khan bowled with superb line and length to restrict the Proteas to 261-6 in reply to Pakistan’s 262 after the match was reduced to 45 overs a side due to rain earlier in the day. South African Captain AB de Villiers won the toss and sent Pakistan into bat with the tourists opening batsman Ahmed Shahzad hammering a flawless 102.