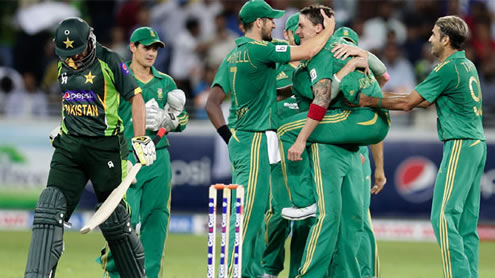 It was another batting failure for Pakistan, who, chasing 151, were cruising along nicely at 101-3 in the 14th over before being restricted to 144-9 in their 20 overs. Paceman Wayne Parnell took 3-25 while leg-spinner Imran Tahir claimed 2-21 and spearhead Dale Steyn finished with 2-20 to rock Pakistan who lost seven wickets in the space of 43 runs.

Sohaib Maqsood top-scored with 37 while Shahid Afridi (14) tried valiantly but failed in the end. Pakistan lost Ahmed Shehzad (21) and Mohammad Hafeez (nought) in quick succession but Maqsood carried on in style, hitting two boundaries and a six off 26 balls before Pakistan lost three wickets at 112.

Tahir bowled Shoaib Malik (15)and Abdul Razzaq (nought) off successive deliveries while Quinton de Kock held a smart catch off Parnell to dismiss Maqsood as Pakistan slump from 112-4 to 112-7. South Africa won the first match by nine wickets on Wednesday.

South Africa skipper Faf du Plessis hailed his team’s comeback. “It’s a great achievement by the team. We played really well under pressure and Pakistan were in a position to win but we pulled it back remarkably,” said Du Plessis. “We said we wanted to come here and win 2-0 and we did that. As a bowling unit we have certainly grown a lot over the last couple of months. Credit to them for the time and effort they have put into it. There is always room for improvement.

“Nice to be back in South Africa and looking forward to another series against Pakistan. We will try to beat them again 2-0,” said Du Plessis of the coming two T20 and three one-day series in South Africa between November 20-30.

Pakistan captain Mohammad Hafeez bemoaned his team’s inability to see out matches. “I think this is the sequence of the (one-day) series,” said Hafeez of Pakistan’s 4-1 loss. “Not finishing games very well. When we needed to play normal cricket, we didn’t handle the pressure. Credit goes to South Africa for bowling in the right areas. Every time we thought we were there, we couldn’t finish it.”

South Africa rode on Du Plessis’s 48-ball 58 not out and a sedate 41-ball 48 by Hashim Amla, who lifted the innings during their 78-run second wicket stand after they won the toss and batted. De Kock chipped in with a quickfire 19-ball 30, studded with six boundaries to give his team a rapid start.

Off-spinner Saeed Ajmal pulled things back for Pakistan by dismissing De Kock and Amla. Amla hit two sixes and three boundaries before he holed out on Ajmal. Du Plessis held one end intact, hitting three sixes and one boundary to lift South Africa to their highest Twenty20 total against Pakistan, beating the 142-9 they made at Nottingham in 2009.

South Africa tied the two-Test series 1-1 on the tour. – Khaleejtimes