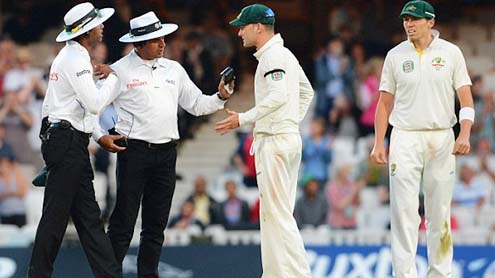 Australia captain Michael Clarke became involved in a physical altercation with the two officials as England’s 3-0 Ashes triumph was marred by farcical scenes on Sunday night.

With England needing just 21 more runs in four overs to complete a thrilling run-chase and their first ever 4-0 Ashes victory, umpires Aleem Dar and Kumar Dharmasena were booed by a capacity Oval crowd when they took the players off as the light closed in at 7.36pm.The Australia captain was furious that the umpires had taken so long to look at their light meters, and a heated exchange ensued as an agitated Clarke was kept at arm’s length by Dar while he tried to read the meter for himself.‘I can’t remember what I said,’ declared Clarke. ‘But I remember Aleem Dar touching me, and I asked him not to touch me, because if I touched him I’d have been suspended for three games.

‘I just know a player is not allowed to touch an umpire, but I don’t have an issue with it.‘I remember seeing the reading when we were told we had to go off during the third Test in Manchester, and it was certainly darker here. But we have to go on the umpires’ call.‘I just asked the question why we hadn’t got the meter out yet, and they took a few overs to get it out.‘When you can see your own shadows, you know that around that time it’s getting close to where the umpires have been to taking you off the field.’

Clarke also felt aggrieved after he was booed at the post-match presentation ceremony by the crowd, having helped set up a grandstand finish by declaring Australia’s second innings on 111 for six, setting England 227 in 44 overs. ‘The reaction doesn’t surprise me,’ he said. ‘But hopefully we gave them something to cheer about today.‘That’s the way I’d like to see cricket played. It was worth having a crack. No rain in Manchester would have been nice. We gave it a red-hot crack here and we came close in Durham.

‘But we were outplayed throughout this series. The result says 3-0, so it doesn’t matter whether I think it was representative or not.’ ECB chairman Giles Clarke was furious that England had been denied their chance to complete a victory.‘It’s totally unsatisfactory the way the game ended,’ he said. ‘The rules are clearly unacceptable and I expect Dave Richardson to change it at the next ICC chief executives’ meeting.’ Alastair Cook, who became the first England captain to deny Australia a single victory in an Ashes series for 36 years, said: ‘It is a shame for an amazing crowd we had here that we weren’t allowed to play to a finish.

‘But the rules and regulations are there for a reason, and it was pretty dark. Cricket doesn’t always work out that way. We knew what was going to happen.’Cook described the triumph as the proudest moment of his life, and can now follow in the footsteps of his predecessor Andrew Strauss by winning the Ashes home and away when England fly south in October.‘We’ve won 3-0 and it’s there in black and white. We’ve won five Tests out of seven this summer and that’s something we can be very proud of.’

That England got so close was down to a superb innings from Kevin  Pietersen, who followed his go-slow half-century in the first innings with a 55-ball 62 yesterday to conjure memories of his Ashes-sealing 158 at The Oval eight years ago.‘We had to give it a go,’ said Pietersen. ‘We wanted to entertain the crowd  and that’s the brand of cricket this team plays.‘I had flashbacks to 2005 and I love batting at this place. But it wasn’t to be in the end. The way we played today certainly will stand us in good stead for the winter.’Cook was full of praise for the immaculate and ever-reliable Ian Bell, who was named man of the series after his haul of 562 runs. ‘Belly was outstanding,’ he said. ‘He scored three hundreds at crucial times.’ Meanwhile, England team director Andy Flower refused to deny reports that he is going to step down from his job at the end of the return Ashes series in Australia in January.‘We never look too far ahead,’ he told Sky Sports. ‘We simply plan for one series at a time.’ – DailyMail