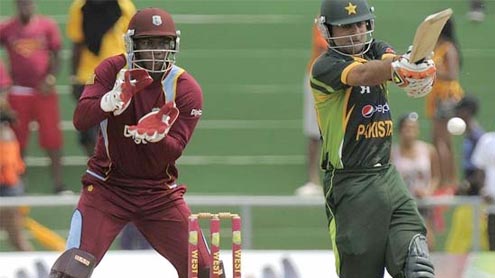 KINGSTOWN: Pakistan held off a desperate late surge by the West Indies to take the second and final Twenty20 international by 11 runs at the Arnos Vale Stadium in St Vincent on Sunday.

In restricting the hosts to 124 for nine in reply to their total of 135 for seven, the tourists took the series 2-0 and moved up to second in the international rankings behind Sri Lanka.West Indies, the world T20 champions, dropped to fourth in what was yet another setback following hard on the heels of the 3-1 loss to the Pakistanis in the preceding one-day international series.

“It was a tough tour and credit must be given to everyone associated with the squad for the success that we have enjoyed here,” said a delighted Pakistan captain Mohammad Hafeez, who also played a key role with the ball in dismissing the dangerous but out-of-form Chris Gayle cheaply for the second time in two days.”When we saw the pitch, we knew, with our four spinners, that any total of 135-140 would have given us a chance, and so it worked out.”

An unbeaten 46 by man of the match Umar Akmal and 44 from opening batsman Ahmed Shehzad paced Pakistan to a total that was always going to be challenging on a slow, turning surface ideally suited to the sub-continental team.Spinners Sunil Narine and Samuel Badree shared five wickets for the West Indies in what would prove to be an ominous precursor of the task the home side had to face in the quest to get a share of the honours.

After looking dead and buried at 17 for four though, the Caribbean side fought back through the middle of their innings thanks to a battling top score of 35 from Dwayne Bravo and an aggressive 28 from Sunil Narine.However it was Kieron Pollard who brought the match back to life in a pivotal 17th over bowled by Zulfiqar Babar that featured spectacular hitting before the left-arm spinner effectively decided the fate of the match with two wickets in two balls.

Pollard launched two mighty sixes and drilled two fours off the first four deliveries, further enlivening an already boisterous crowd as they sensed the possibility of a miraculous victory.But Zulfiqar held his nerve and the big-hitter s attack could not be sustained.He sliced a catch to deep cover and off the next delivery, Bravo also swung hopefully to be snared at wide long-off.After his sensational debut in the first match on Saturday when he took three wickets and then hit a six to win the match off the final ball, Zulfiqar was the deserving man of the series as he also contributed useful scores of 14 and 11, both unbeaten, in the two matches.

Any flickering hope that the West Indies had of getting to the target was effectively extinguished in the next over, although there was still more drama.Captain Darren Sammy heaved at Saeed Ajmal and skied a straightforward catch that was floored in a collision between the bowler and the advancing wicketkeeper Akmal.His luck ran out three balls later when attempting again to clear the boundary and Shahid Afridi took the catch at long-off.”When Asian teams come to the Caribbean, maybe we shouldn t be giving them these types of wickets,” said a disappointed Sammy in reflecting on the pitches not only for the T20s but also for the preceding ODIs in Guyana and St Lucia.

“It suited them more than it helped us. At the end of the day though, they played the better cricket.”Tino Best blasted a couple of sixes that still kept the West Indian faithful hoping against hope.But left-arm seamer Sohail Tanvir, whose early burst accounted for Johnson Charles and Marlon Samuels to catches at the wicket, ensured that Pakistan did not completely fall apart in the final over of the match.Meanwhile, the Pakistan Cricket Board (PCB) said they were “extremely concerned” over British media reports that their ODI series with the West Indies was being investigated for alleged suspicious betting patterns.

The Mail on Sunday raised the allegations over claims of wrongdoing in the series which Pakistan won 3-1 with one game tied.”The PCB is obviously extremely concerned at the recent allegations of fixing reported in the media with regard to recently concluded ODI series between Pakistan and West Indies,” an official told cricinfo.com.The PCB maintains zero tolerance towards corruption in the game but investigations in this matter falls within the purview of the ICC s Anti-Corruption and Security Unit.”The PCB is in contact with the ICC on this issue and understands that the ICC will be issuing a media release soon.” – DunyaNews