Misbah angry at Ramdin over ‘catch’ 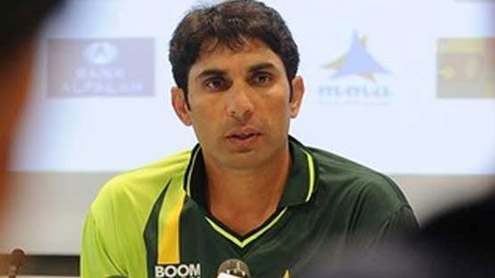 Misbah angry at Ramdin over 'catch'

Misbah scored a career-best 96 not out in his side s two-wicket defeat in south London but thought he was out for nought when Ramdin claimed a catch off man-of-the-match Kemar Roach.Australian umpire Steve Davis gave Misbah out but, following the intervention of English official Nigel Llong at square leg, the decision was referred to third umpire Tony Hill.Replays showed that while Ramdin had, initially, caught the ball, he had subsequently allowed it to spill out of his grasp.

Eventually it was decided that Ramdin did not have full control over the ball and Misbah was reprieved.Had he been dismissed, Pakistan would have been 17 for four.As it was, they went on to make 170 all out before their bowlers made West Indies work hard to reach a seemingly modest victory total.”What can I say about that? He (Ramdin) should have told (the umpire) what happened,” said Misbah.”I don t know what he was thinking at that time.

“I don t think I would be happy if my wicket-keeper did that,” added Misbah.”If you don t know if it is (a catch) then fine, but if you know it s not a catch you shouldn t claim it because it s not in the spirit of the game.”West Indies captain Dwayne Bravo defended Ramdin against accusations of bad sportsmanship, insisting the keeper genuinely believed he d held on for long enough to claim a fair catch.”Denesh thought he honestly had control of the ball,” Bravo said.

“He is a very honest player and history shows that we as a country don t have any stigma of negativity around us. We play the game in the right way. I don t see anything wrong with it.”While Roach was denied the wicket of Misbah, he took the first three wickets to fall as Pakistan collapsed to 15 for three.The paceman finished with a man-of-the-match-winning return of three for 28 off 10 overs while off-spinner Sunil Narine took three for 34.West Indies then collapsed themselves before Ramdin and Roach saw them home with just under 10 overs left.

Defeat effectively left Pakistan probably needing to win their final pool games against India and South Africa if they were to advance from Group B to the semi-finals.But Misbah insisted all was far from lost.”It is possible. We have seen it happen so many times before,” the Pakistan captain said. “We just need to be a bit more responsible with our batting.”We should have got 230 or 240 here. That would have been a good total.”Even 15 or 20 runs could have made the difference. There is nothing to be worried about. We just need to score those extra runs.” – DunyaNews