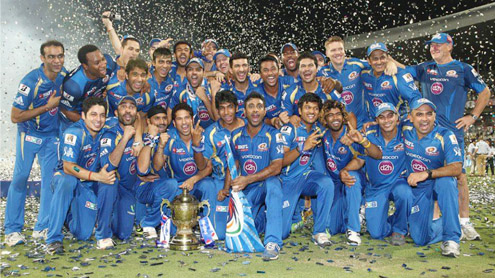 KOLKATA: The two best and most powerful teams duly earned their place in the 2013 IPL final, but in the end it was one-way traffic as a determined Mumbai Indians crushed two-time winners Chennai Super Kings by 23 runs at Eden Gardens on Sunday to get their hands on a maiden IPL trophy.

A late assault from Kieron Pollard lifted Mumbai out of a hole to a competitive 148 for 9, setting CSK a target of 149 to clinch their third IPL title but they came undone in a series of forgettable shots after Lasith Malinga winked out two wicked in the first over. In the final outcome, Pollard’s unbeaten 60 off 32 balls proved massive for Mumbai. CSK had done well from the time Rohit Sharma won the toss and opted to bat, but the runs that Pollard smacked in the death overs were pivotal.

Playing the biggest match of his fledgling Twenty20 career, Mohit Sharma trapped the dangerous Dwayne Smith lbw for 4 with his fourth delivery and all Albie Morkel had to do was pitch the ball full to uproot Aditya Tare’s stumps first ball to leave Mumbai hurting at 8 for 2. That became 16 for 3 when Rohit Sharma tame chipped a return catch to Morkel in the fourth over, setting Mumbai back further.

Dinesh Karthik, Mumbai’s second-most successful batsman this season, and Rayudu ensured CSK did not stomp entirely over the opposition with a 36-run stand in 6.1 overs. Rayudu thumped Morkel down the ground and through square leg, mixing power with placement, while Karthik found rotated the strike well. However, after settling the innings through watchful strokeplay, Karthik attempted an expansive drive against Chris Morris and ragged onto his stumps for 21 off 26 balls.

That ushered in the highest partnership of the innings – 48 – dominated by Pollard, who wasted little time in getting started. He punched his first ball down the ground and then swung R Ashwin for six over long-on. Pollard swatted two boundaries off Ravindra Jadeja to take the score to 100 for 4 in 15 overs, setting himself up for a late surge. Dwayne Bravo bowled Rayudu (37) to become the leading wicket-taker this season, but took some tap before collecting his 30th wicket as Harbhajan Singh (14) struck him for three fours in the 18th over.

Morris bowled out with a superb six-run over in which Mohit Sharma nailed throw form the deep to run out Rishi Dhawan (3), and Bravo grabbed two more when Mitchell Johnson (1) and Lasith Malinga (0) edged to MS Dhoni. Crucially for Mumbai, this meant that Pollard did not get on strike until the fifth ball of the final over. He punched a full toss down the ground for six to reach fifty, and then dumped the next over long-on. Those were resounding shots which gave Mumbai a stride in their step going into the interval.

Few could have predicted such a feeble run-chase from a mighty CSK batting line-up. Given the new ball, Malinga struck two massive blows in the first over of Chennai’s chase. In consecutive balls he bowled Michael Hussey with yorker and bounced out Suresh Raina, who fended to square leg. Then Johnson got in on the act, having S Badrinath nick to Karthik.

In ten deliveries CSK were 3 for 3 with two batsmen registering ducks next to their names. Unaccustomed to losing wickets to early, CSK collapsed spectacularly. Bravo (15) chipped Dhawan to mid-on, Jadeja (0) lofted Harbhajan to long-off, Murali Vijay (18) played a nothing shot off Johnson and Morkel (11) yorker himself against Praygan Ojha to leave CSK haemorrhaging at 57 for 7 in 11 overs. It made for ugly viewing.

This left Dhoni to try and rescue a sinking chase, but even this was too much for the league’s best finisher. The CSK captain progressed to a fifty in 41 balls, denting Pollard’s figures with two sixes in the final over, but the West Indian allrounder had the last laugh when the match ended with Mumbai’s dugout clearing onto the field.