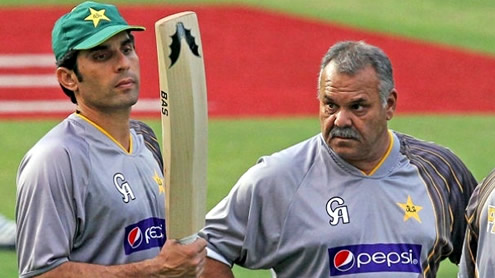 LAHORE – Former players have questioned some of the selection decisions made by the tour selection committee and the role Whatmore has played so far. Asif Iqbal said the Board had raised false hopes among the cricket followers in Pakistan ahead of the South Africa.

Pakistan’s capitulation in the three match Test series in South Africa has not only led to stinging criticism from former players but also spawned a debate on, if Pakistan dressing room is a divided house.

There is talk about Test captain Misbah-ul-Haq having an argument with his deputy Mohammad Hafeez during the third Test, which the team lost by an innings and 18 runs on Sunday. “The argument was the result of Hafeez’s insistence on having the ball changed during South Africa’s first innings in the first session on the second day after which the South Africans added more valuable runs to their total. “Misbah didn’t think they should ask the umpires to change the ball as the bowlers were getting some reverse swing but Hafeez who has a influential presence in the team insisted it should be changed,” the source said.

The source said they were even question marks over whether fast bowler Umar Gul, the most experienced bowler in the side, could have played the third Test. “There is a big question mark over how serious was Gul’s illness that kept him out of the Test or whether he himself had lost the will to play the match after struggling in the first two matches,” the source said Another source said the atmosphere was not as positive it normally is in the Pakistan dressing room.

“Certainly now questions need to be asked over the role/influence of some seniors in the dressing room after the way the team crumbled in the matches,” the source said. “If Pakistan also struggles in the one-day series then definitely Misbah’s tenure as Test and ODI captain could be over while the free hand given to Hafeez and Whatmore could also be curtailed dramatically,” the source said. Former players have questioned some of the selection decisions made by the tour selection committee and the role Whatmore has played so far.

Former captain, Asif Iqbal said the Board itself had spoilt the players and made them soft. “These players are professionals and are well paid for their jobs. Than what is the purpose of the board giving special bonuses and cash prizes or making a big noise after the team beat England in the Test series, when it reached the semi-finals of the T20 World Cup and won the one-day series in India,” Iqbal said. “This has I feel spoilt the culture in the team why are we rewarding players for something they are supposed to do anyway as professionals and for which they are already being well paid,” the former captain said.

He also said the Board had raised false hopes among the cricket followers in Pakistan ahead of the South Africa. “Realistically in the last two years we have done well against teams mostly in sub-continental conditions like we find in UAE, Sri Lanka or India. I don’t think the chances of our team were ever realistically assessed before the tour.” He also questioned for the need to have such a big support staff with the team.

“I have always felt that the lesser people you have on the bench it is always better for a team. Too many people means too much advice and that does not work sometimes. I just feel there should be a coach who needs to be good at man management and motivating the players,” he said. – Pakistantoday