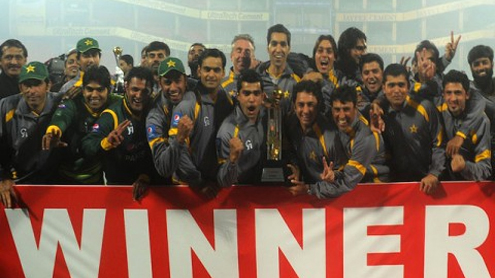 Lanky pacer Ishant Sharma finished with 3/36 to bundle out Pakistan for 157. Pakistan won the series 2-1. Despite bowling India out for mere 167, Pakistan failed to assert dominance over the hosts as they lost wickets at regular intervals. Indian bowler displayed great commitment as they didn’t allow the visitors to score easily. India’s young sensation Bhuvneshwar Kumar spoiled Pakistan’s start with his double strike. Kumar reduced Pakistan to 14/2 by claiming Kamran Akmal and Younus Khan in consecutive overs. Though Nasir Jamshed, Misbah ul Haq and Umar Akmal offered some resistance, Indian bowlers turned the tide in India’s favour in death overs to win the 3rd ODI.

So pathetic was India’s batting that they could not even last the full 50 overs after electing to bat. They were bundled out in 43.4 overs as Pakistan off-spinner Saeed Ajmal recorded a career-best performance of five for 24. India’s top-order collapsed again in the face of some fiery bowling by the Pakistani pacers — Junaid Khan and Mohammad Irfan — at the Feroz Shah Kotla ground.

Pakistan bowled as a unit — the fast bowlers provided a start and the spinners carried on with the good work. India owed their partial recovery to a sensible partnership between skipper Mahendra Singh Dhoni (36) and Suresh Raina (31). They joined forces when the team was stuttering at 63 for four and their 48-run stand for the fifth wicket repaired the flagging innings to some extent. They batted cautiously, looking for singles and punishing the bad balls.

Raina was timing the ball well, driving and lofting confidently. The diminutive left-hander hit an elegant six off Mohammed Hafeez over long-on and Dhoni, too, later hit the same bowler for two consecutive sixes. However, Ajmal broke the stand by trapping Raina before also scalping R Ashwin in the next ball, which brought Ravindra Jadeja to the crease.Dhoni dispatched Hafeez for another six over mid-wicket boundary before being dropped by the same the bowler in his follow through later on. Dhoni smashed one hard, which Hafeez tried to latch on to but only ended up hurting his left hand. Dhoni was batting on 29 at the time.

Dhoni could not cash in on the chance and was out to Umar Gul when he went for a cut only to find Umar Akmal at point. His 55-ball knock featured four boundaries, including three sixes. With Dhoni’s dismissal, India’s hopes of a recovery were crushed even as Jadeja came up with a useful cameo of 27 with the help of two sixes. Junaid and Irfan tested the Indians with some short and fast deliveries and succeeded in subduing the host’s top- order. The Kotla wicket had some juice and the Pakistani duo made full use of the conditions to keep the Indians under check. India left out struggling opener Virender Sehwag and brought in Ajinkya Rahane, hoping for a good start, which has eluded the hosts right through the series.

Rahane (4) was never comfortable and fell prey to the seven-foot tall Irfan when he edged one to keeper Kamran Akmal. Baring a few shots, Gautam Gambhir’s (15) stay was also uncomfortable before he gifted away his wicket by guiding a widish delivery off Irfan straight to point.Local boy Virat Kohli (7) made a promising start with a boundary off Irfan, which got the spectators off thir seats. But he was soon scalped by Junaid in the slip cordon.

With both the pacers bowling in tandem, Pakistan captain Misbah-ul-Haq let the two bowl an extended seven-over spell each. After 14 overs, India were reeling at 43 for three and the crowd, which braved a chilling winter to see their stars in action, had only five boundaries to enjoy.Two of those five shots came from the blade of flamboyant left-hander Yuvraj Singh at the start of his innings. The introduction of Umar Gul gave India their best over as the paceman was spanked for 18 runs. India’s joy, though, was short-lived as off-spinner Mohammed Hafeez castled Yuvraj with a faster one that spun from the middle before taking the bails off.