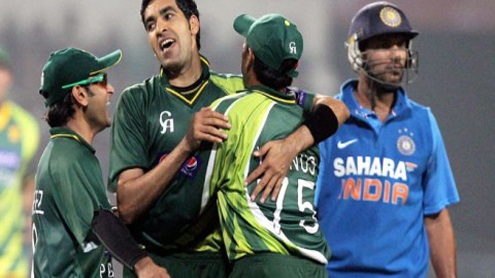 An insipid India slumped to yet another series defeat with a pathetic display as arch-rivals Pakistan spanked the hosts by 85 runs in the second cricket one-dayer to take an unassailable 2-0 lead in the three-match series on Thursday.

Riding on Nasir Jamshed’s second consecutive century, the visitors posted 250 all out and then shot out the Indians for a paltry 165 to record a convincing victory with two overs to spare at the Eden Gardens. It was yet another woeful display by the famed Indian batting line-up, which has been struggling for some time now and has been largely responsible for the team’s forgettable results in recent times.

The huge defeat to the arch-rivals will now raise questions on the future of some of India’s under-performing batting stars, who have let the team down more often than not. Jamshed (106) notched up his third ODI century, all three coming against India, but Pakistan suffered a dramatic collapse after being at a healthy 141 for no loss at the mid-way stage.

Mohammed Hafeez was the other contributor with a rollicking 76 off 74 balls. The floodgates opened up after the dismissal of Hafeez as none of the other batsmen could hang around for long on a slow Eden Garden track, which made stroke-making difficult after the ball became older. – PT

Google makes concessions to avoid legal action in US