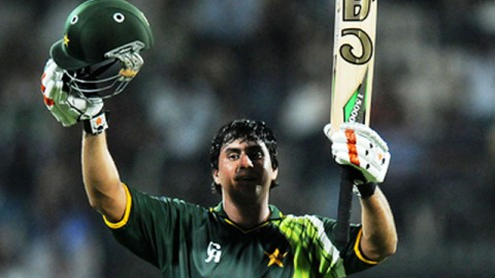 CHENNAI: Fortunes swung in an absorbing opening one-dayer, but it was Pakistan who held their nerve to record a six-wicket win and go one-up here on Sunday.

Junaid Khan had India reeling with a remarkable spell of swing bowling, MS Dhoni bailed India out with a tenacious, unbeaten century but the target of 228 wasn’t enough to test Pakistan. Nasir Jamshed played a composed, yet chancy century, but nevertheless took the responsibility of finishing the job he had started. The difference was in the way the teams batted against the new ball.

India were put in and ended up losing 5 for 29 by the tenth over. Dhoni toiled masterfully, fighting off cramps to take India to a respectable total, but not quite a winning one. Pakistan too looked shaky when they came out against the moving ball, but ensured they didn’t lose wickets in a clump early, unlike India.

The morning had ingredients one wouldn’t normally associate with one-day cricket in India – morning start, overcast conditions, a green pitch, moisture. The left-arm seam duo of Junaid and Mohammad Irfan hit the timber with such regularity that they might well have come out wielding axes rather than cricket balls. Reputations counted for nothing as India’s top order was exposed for their lack of technique against the moving ball against two seamers with a combined experience of 15 ODIs.

Virender Sehwag, Gautam Gambhir, Virat Kohli and Yuvraj Singh were all bowled through the gate, playing down the wrong line to full, swinging deliveries. Dhoni and Suresh Raina came together at 29 for 5 and focused on picking up singles rather than counterattacking their way to a recovery.

Dhoni’s innings was of two contrasting parts. He nudged and poked his way to fifty off 86 balls, hitting just two boundaries and a six. The plan was to delay the slog till the final block of ten overs. His next 61 came off just 39 balls. As the innings closed, Dhoni could barely stand. In a bid to conserve energy, Dhoni focused on hitting out and it was a blessing in disguise for India as he regularly found the gaps, helping India ransack an unlikely 81 off the last ten overs. His stand of 125 with Ashwin was India’s highest for the seventh wicket. Dhoni’s march towards his century featured an array of shots on both sides of the wicket, including the helicopter shot, the pull and the squirt past gully.

India held control at the start of the innings when Mohammad Hafeez misjudged a viscious inswinger and lost his off stump, giving Bhuvneshwar Kumar a wicket off his first ball in ODIs. Bhuvneshwar dismissed a shaky Azhar Ali cheapy to reduce Pakistan to 21 for 2 after 10.2 overs. Thereafter, the initiative slipped from India due to a combination of bad luck and poor fielding. Jamshed was let off thrice in his innings, on 7, 24 and 68. He first set off for a single that should never have happened, scampered back but there was nobody to back Bhuvneshwar’s throw. He was then let off by the umpire, who failed to spot an inside edge to the pads on its way to slip. Later, Yuvraj spilled a sitter at point at a time when India were desperate for a wicket.

In between, Jamshed impressed with his temperament and it helped that he had the experienced Younis Khan to guide him. The pair focused on preserving wickets, preferring to keep with the asking rate rather than exceed it.Ashok Dinda broke the stand when he had Younis chipping a low catch to Ashwin at midwicket, and he ought to have had Jamshed as well, had Yuvraj hung on at point. As Jamshed began to tire, Misbah and Shoaib Malik scored boundaries to take Pakistan closer. Jamshed reached his century with a pull, drawing comparisons with his innings against Australia in Abu Dhabi in August, also scored under excessive humidity. – Nation