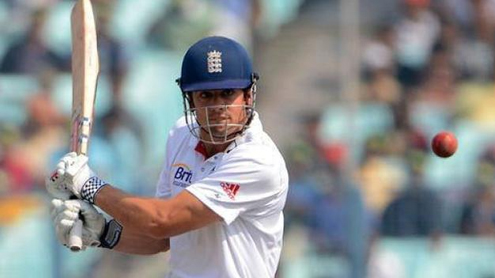 Skipper Alastair Cook created history by cracking his 23rd Test century, the most by an Englishman, and his third consecutive one in the series as England took complete control of the third Test against a listless India on Thursday.

Cook remained unbeaten on a brilliant 136 to lay the platform for a mammoth first innings total as the visitors cruised to a comfortable 216 for one at close on the second day.In reply to India’s first innings score of 316, England put up a solid batting display and rode on a 165-run opening stand between Cook and Nick Compton (57) as Indian bowlers had a disappointing day. Currently England need another 101 runs with nine wickets in hand to take the first innings lead and consolidate the position from there on.

Having scored his 23rd Test ton which is highest by any English batsmen, Cook also created a world record of notching five centuries from the five Test matches as captain. The England captain led from the front as he struck a six and 19 boundaries in his nearly five hour long undefeated stay at the crease and became the youngest batsman to go past 7000 Test runs at the age of 27 years 347 days, eclipsing Sachin Tendulkar’s record of 28 years and 193 days.

In his sparkling innings, Cook gave a solitary chance while on 17, when he was dropped by Cheteshwar Pujara of the bowling of Zaheer Khan — a miss that eventually proved too costly for the Indians and it will be difficult to bounce back in the series which is levelled 1-1. Earlier resuming the day at 273 for seven, skipper Mahendra Singh Dhoni scored a half-century before the hosts were bowled out inside the first hour of the day. Dhoni scored 52 off 114 balls with five fours and two huge sixes off Monty Panesar’s bowling and was the last man out when he unsuccessfully tried to fend a short-pitch delivery from Steven Finn.

The Indian bowling proved to be pedestrian with an out of form Ishant Sharma providing a lot of loose deliveries. Even the spinners, especially off-spinner Ravichandran Ashwin, looked woefully out of form while left-arm spinner Pragyan Ojha also toiled without much success.

While Zaheer had figures of none for 48 from 16 overs, Ishant gave away 35 runs in his 15 wicketless overs. The sad part about Ishant’s bowling was lack of rhythm as he also overstepped on couple of occasions. Ojha however gave India their only breakthrough in the final session of the day when Compton was given out leg before and the decision by New Zealand umpire Rod Tucker looked to be a dubious one.

After being put down at first slip by Pujara, Cook did not have any trouble negotiating the Indian attack as he raced to his 50 in the second session.

S Tendulkar c Prior b Anderson   76