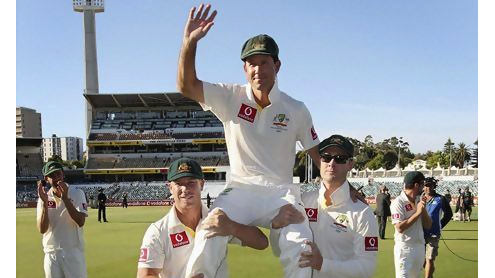 PERTH: South Africa thrashed Australia by 309 runs in the third Test on Monday to hold on to their number one Test ranking and ruin an emotional farewell for veteran batsman Ricky Ponting.

Set a mammoth target of 632 runs to win, Australia lost their first wicket on the second ball of the fourth day and they were eventually dismissed for 322 as the Proteas sealed the three-Test series 1-0. Graeme Smith’s South Africans became the first team in two decades to defeat Australia on home soil in consecutive tours, with the West Indies the previous team to achieve it in 1992-93. Smith said winning two series in Australia in a row was his finest moment in cricket.

“It has been a tremendous effort,” he said. “I am extremely humbled … for us it means the world, there are people in our set-up who have taken many beatings on tours of Australia. “We know what is required to win here; we have been a part of something really incredible and special. This is the proudest achievement of my career.” The South Africans achieved it with sporting good grace after forming a highly unusual honour guard for Ponting, 37, Test cricket’s second highest run-scorer, as he emerged for his final innings. “I was a little bit embarrassed and wish it didn’t happen that way, but it was an amazing gesture by Graeme and the South African team,” Ponting said.

In their 200th Test since being allowed back into international cricket, South Africa were only denied their biggest-ever victory in a match decided in the fourth innings by a defiant 87-run last-wicket stand. Number 10 Mitchell Starc smashed an unbeaten 68 off 43 balls to share in the highest-ever last wicket partnership at Perth’s WACA Ground with Nathan Lyon 31 off 43 balls. South Africa’s win also continued their remarkable away record, with the Proteas not beaten in an away series since losing 2-0 in Sri Lanka in 2006. They have lost none of their three Tests at the WACA, with two wins and a draw. The Australians went into the match as the form side in the two prior drawn Tests.

Australian captain Michael Clarke lamented his team’s inability to win the second Test in Adelaide and also their performance on day two in Perth, when they collapsed with the bat to be dismissed for 163, and then watched South Africa plunder 206 runs in the final session to take total control. “South Africa showed why they are the number one Test team in the world,” he said. “What South Africa showed us was when they had momentum, they ran with it as long as they could and when they didn’t have momentum they did everything in their power to grab it back.”

Australia needed to produce an unprecedented run chase to win the match, but that never looked a possibility after David Warner (29) fell to Vernon Philander (2-41) in the first over of the day. In his 168th and final Test, Ponting came to the crease at 81 for two, but the fairytale ending did not materialise and he made just eight in his last innings. He lasted only 23 deliveries and 40 minutes before Jacques Kallis attempting to force spinner Robin Peterson off the back foot just before lunch caught him at first slip. “I’ve been lucky to play as many Tests as I have and cherished every moment, it was always going to end at some stage I guess,” Ponting said.

Ponting finished his career with 13,378 Test runs at 51.85, including 41 centuries, but with just 32 runs in his last series at 6.40. Ponting also shares the record of 168 Test appearances for his country with his predecessor as Australian captain, Steve Waugh. Clarke and Mike Hussey briefly steadied the Australian ship with a 58-run stand for the fifth wicket, before both fell in quick succession just before tea as the Proteas turned the screw. Clarke was stumped from the bowling of Peterson (3-127) for 44, while Hussey became the 13th Australian to pass 6,000 Test runs before being caught behind for 26 from the bowling of Dale Steyn (3-72). – Dailymail