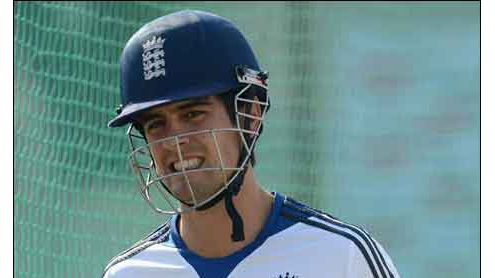 AHMEDABAD: England fought brilliantly through first Alastair Cook and then Matt Prior to not only erase the deficit, but take a lead, ending the day with their second-innings score reading 340 for five on day four at the Sardar Patel Stadium in Motera on Sunday.

Cook made a magnificent 168 in 505 minutes from 341 balls with 20 boundaries and still at the crease with Prior who was 84 not out when the play ended on the fourth day.With 21 Test hundreds to his name, Cook is now a ton short of equalling the record for the most centuries in Test cricket for England. The greats from yesteryear – Wally Hammond, Geoffrey Boycott and Colin Cowdrey — have 22 to their name. With many years of cricket ahead of him, Cook is certain to break this record and set a new benchmark for England.

Earlier, England resumed their second innings at 111 for no loss with an uphill task of making further 219 runs to avoid the innings defeat.But Cook and Nick Compton added just 12 runs when the latter departed for 37. Both scored 123 runs for the opening stand to give England a sound start.However, England lost four more wickets for 76 runs before Prior joined Cook and both took the innings to 340 without further damage at stumps.They added 141 runs for an unbeaten sixth wicket partnership to get England a lead of ten runs with five wickets in hand. They still have a long way to bat for a draw as they have one full day left. – Thenews