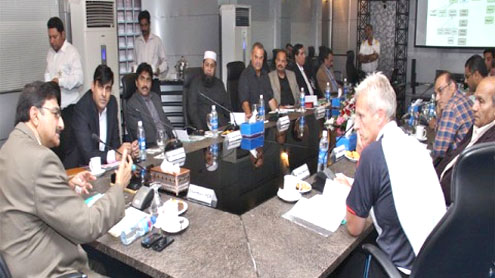 LAHORE: Pakistan Cricket Board (PCB) has sought the expertise of England’s former national team coach, Peter Moores and some of Pakistan’s leading former captains in a bid to improve the domestic structure and make its national and regional cricket academies more productive.

The PCB invited Moores and former captains, Waqar Younis, Inzamam-ul-Haq and Aamir Sohail to a high level meeting chaired by PCB chief Zaka Ashraf at their headquarters Wednesday.“There will be more such meetings over the next two days in which some other players including Wasim Akram have been invited as the chairman is keen to get expert feedback in a bid to bring about improvements in the domestic structure and academies,” a source in the PCB said.

The PCB has already signed on Wasim Akram and Inzamam to hold specialised camps for bowlers and batsmen next month ahead of the tour to India and South Africa.Moores, who remained England’s coach from 2007 to 2009 and has also headed the England and Wales Cricket Board academy, sources said had given valuable input during the meeting on the areas where Pakistan needed to work on in its domestic structure and academies. – Nation