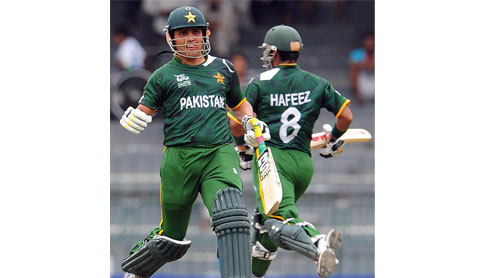 COLOMBO: Pakistan beat India by five wickets during the warm-up match on Monday ahead of the World Twenty20.

Pakistan’s Saeed Ajmal took two wickets while the third wicket was taken by Umar Gul.Earlier, India had won the toss and elected to bat against Pakistan.The match, part of the warm-up schedule drawn up by the International Cricket Council, is the only one of 12 practice games that will be beamed live by the host broadcasters.

India and Pakistan have been drawn in separate groups for the preliminary league, but will meet in the Super Eights round in Colombo on September 30 if the seedings go to plan.The two nations have played just two official Twenty20 internationals against each other, both during the inaugural world event in South Africa in 2007.