Team to give positive results in U-19 World Cup 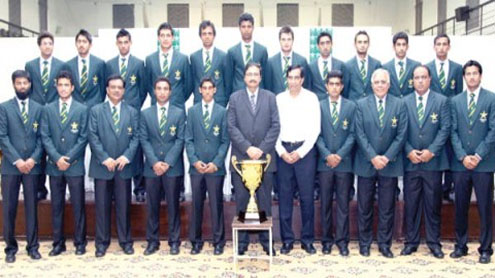 LAHORE: Haroon Rasheed, manager of Pakistan U19 cricket team, believes that the team under Hammaz Azam would produce positive result in the upcoming three-match series against Australia and the Under-19 World Cup.

“It is a talented combination which is together for the last one year during which it struck encouraging results and a lot is expected from it in the coming two assignments,” he said before leaving for Australia here on Tuesday. Pakistan U19 will play three one-day matches against Australia before its participating in the Cup from August 11. Pakistan will open its World Cup campaign against Afghanistan on the first day of the event.

He said during past one year the team participated in good number of tournaments abroad and its recent showing in Junior Asia Cup was quite commendable as it finished as joint winner with India before doing good in South African tour.“Expectations are high from this team and there is dire need to show consistency on part of players,” said the team manager.H said: “The three match series ahead of Cup will help the players to adjust with the playing conditions in Australia and by that way the players will get into rhythm and action to display their best in the Cup.”

Haroon said the team has a variety of specialists in it. “If you look at the composition of the team, you can find good spinners of different types, in depth batting with all rounder who can bat even at the number eight position.”He said the cup is a real test of team’s skills as it has not yet played top teams including Australia, England and New Zealand and collective efforts and fighting spirit laced with hard work and commitment can lead the side to success.

Team’s coach, Sabih Azhar predicted team’s success in the Cup saying “it is fully capable of winning the grand event keeping in view its recent productive performances. “We are going to Australia with a high hope to win the Cup and players are fully motivated and in good shape to launch their campaign on a confident note in the mega event,” said the team official. He termed Junior World Cup a “tough competition” as world’s best teams are taking part in it. “It is not going to be easy at all, its every match is important and any weaker opposition cannot be taken as a undermine strength.

Team’s captain Babar Azam said after winning the team Asia Cup jointly with India team’s morale is very high and players are fully determined to maintain the flow of their recent victories. “World Cup is a different tournament and we will be playing it with full commitment and professional approach to win the title,” he added. – PT