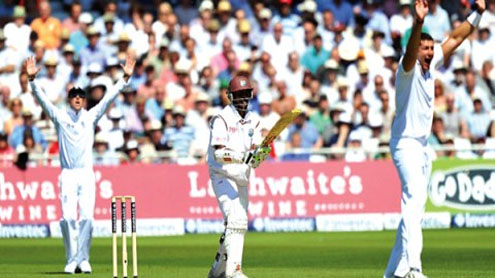 NOTTINGHAM: West Indies, after winning the toss, were 304 for six against England at the close of the first day of the second Test at Trent Bridge here on Friday.

Marlon Samuels was 107 not out and West Indies captain Darren Sammy 88 not out, with their unbroken seventh-wicket stand currently worth 168. England lead the three-match series 1-0. England dismissed West Indies’ mainstay Shivnarine Chanderpaul as the tourists’ collapse continued on the first day of the second Test at Trent Bridge here on Friday.The West Indies were 154 for six at tea, with Marlon Samuels 41 not out and captain Darren Sammy, who’d won the toss and batted with the ground bathed in sunny conditions and blue skies overhead, unbeaten on 11.

Chanderpaul, who batted for over 10 hours during England’s five-wicket win in the first Test at Lord’s that gave the world’s top-ranked Test side a 1-0 lead in this three-match series, was lbw for the second time in as many innings to Graeme Swann. Left-hander Chanderpaul, playing back, had made 46 when Swann’s appeal was rejected by umpire Asad Rauf. But it was no surprise when England captain Andrew Strauss reviewed the decision. Replays showed the ball would have hit the stumps and Chanderpaul had to go after more than two hours at the crease featuring nine fours.

West Indies’ top order had failed repeatedly during a run of just two wins in 31 Tests coming into this game. Yet such were the conditions, it would almost have been an admission of weakness had Sammy fielded first after winning the toss. Nevertheless opener Adrian Barath, who battled hard for his runs at Lord’s, was out for nought when he he edged a rising ball from Stuart Broad and third slip James Anderson held a brilliant, left-handed, head-high catch. New batsman Kirk Edwards then fell for seven when Anderson’s superb off-cutter beat his defensive shot.

Much has been made of the absence of top-order batsmen Chris Gayle and Ramnaresh Sarwan after their respective disputes with the West Indies Cricket Board (WICB) but they, too, might have struggled to keep out such a delivery.Darren Bravo later drove at Anderson without moving his feet and was caught by second slip Swann. Chanderpaul, in at 86 for three and 36 for three at Lord’s, entered at 42 for three with another huge repair job on his hands and was lucky to stay at the crease when he edged Anderson between second and third slips when on four.

Meanwhile, opener Kieran Powell, who got off the mark by cover-driving Broad for four, whipped Anderson and Tim Bresnan through mid-wicket.But Broad, changing ends, had left-hander Powell, driving loosely, caught by Anderson for a 33 featuring seven boundaries, leaving West Indies in dire straits at 63 for four. Samuels was given out lbw for one off Bresnan but successfully reviewed Rauf’s decision. – PT