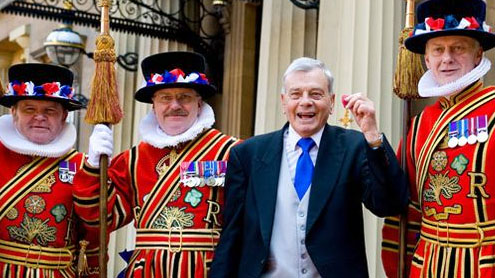 LONDON: English umpiring great Harold “Dickie” Bird was presented with an honour at Buckingham Palace on Tuesday in recognition of his outstanding sporting career and charity work.

The 79-year-old was made an officer of the Order of the British Empire (OBE), receiving the honour from Prince Charles, the heir to the throne, at the investiture ceremony in London. Bird, from Barnsley in Yorkshire, northern England, stood in what was then a world record 66 Tests from 1973 to 1996 before stepping down as a Test umpire.

He joked about needing a strong tipple after the ceremony. “I don’t normally drink, but I could do with a brandy,” he joked.Bird described the OBE as a “great honour” and said it was something he would cherish. Prince Charles presented the honour just a few months after the men met in the former official’s home town, where they chatted beneath a statue of Bird unveiled in 2009.