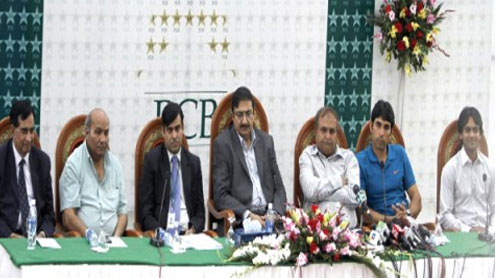 LAHORE: The Pakistan Cricket Board has on Thursday named Mohammad Hafeez as captain of the national T20 team and retained Misbahul Haq as skipper for Tests and one-day internationals.

Addressing a press conference here at the National cricket Academy, PCB chairman Zaka Ashraf said: “The appointments are for the coming tour to Sri Lanka. Pakistan tour Sri Lanka from May 29 to play three Tests, five ODIs and two Twenty20 matches.Misbah, who turns 38 this month, was also dropped from the T20 squad announced for the tour, signaling an end to his career in that format. The selectors announcing revamped separate Test, ODI and T20 squads for the Sri Lanka tour.

Chief selector, Iqbal Qasim said that after holding discussions with coach Dav Whatmore the idea was to have separate teams for all three formats which had necessitated the changes in the T20 captaincy and side. “We are now looking ahead to the future and specialised players since we also have the T20 World Cup lined up this year that is why we have decided to blood new players.” Misbah who has led Pakistan in all three formats since last year after Shahid Afridi was sacked as captain of the ODI and T20 sides, said he was not disappointed at losing the T20 captaincy or place in the team.

“Whatever the selectors and board thinks right, they have done it. I am not disheartened. My job is to still focus on leading the side well in Tests and ODIs which remains a major responsibility,” he said. The selectors recalled fast bowler, Mohammad Sami in all three teams announced on Tuesday. He last appeared for Pakistan in 2010.Also recalled is middle order batsman, Faisal Iqbal to the Test side after a gap of two years and opener Khalid Latif. The new players include batsmen, Ayub Dogar, Haris Sohail and Afaq Raheem. PCB chief Zaka Ashraf made it clear that the board appreciated the good work done by Misbah since last year but needed to move on. “ Hafeez will also be vice captain to Misbah in the Tests and ODIs,” he said.