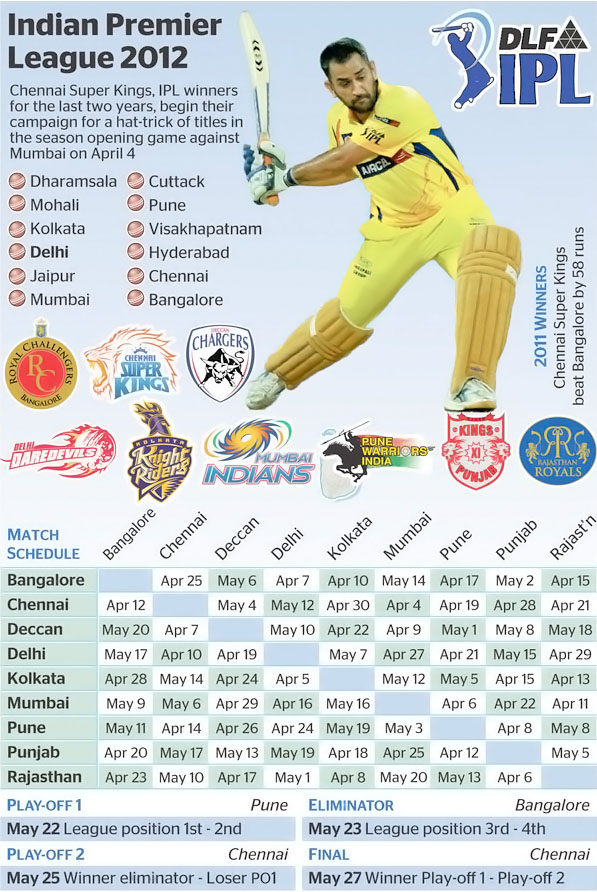 A galaxy of stars, including Amitabh Bachchan and American pop star Katy Perry, will set the ball rolling for the fifth edition of Indian Premier League which promises to enthrall the audience on Tuesday.

High-octane Twenty20 cricket will get underway on April 4, promising excitement and entertainment for the audience in the next 54 days when nine teams will be competing featuring international heroes and unheralded players.Having proved its success in the past four editions with growing popularity, the Indian cricket board’s money spinning event will formally be launched with the IPL Opening Nite.

The dazzling show will be graced by legendary Amitabh Bachchan, Bollywood stars Priyanka Chopra, Kareena Kapoor and Salman Khan among other celebrities. The gala ceremony at the YMCA College of Physical Education would also feature all nine team captains taking the MCC Spirit of Cricket pledge.Although very little information has been shared on the Opening Nite, whose tickets start from Rs 1,500, the evening is expected to provide a sumptuous feast of dance and music for the fans with American pop star Katy Perry set to perform for the first time in India during the show, which will also have India’s dancing sensation Prabhudeva.

The tournament proper will kick off on April 4 with holders Chennai Super Kings taking on last year Champions League winners Mumbai Indians in the inaugural match at M A Chidambaram stadium aiming for a hat-trick of titles.Mumbai captain Sachin Tendulkar will play for the first time before home fans after achieving the great feat of 100 international centuries in Asia Cup. A total of 76 matches will be played across 12 venues across the country in the run up to the finals on May 27. The league stage will comprise 72 ties with each team playing the other eight in a home-and-away format. The play offs would be hosted by Bangalore and Chennai, the finalists from the previous edition.

The edition has been reduced to a nine-team affair after last year entrant Kochi Tuskers Kerala’s franchise was terminated by the BCCI in September last for breach of terms of agreement.Expectedly, not many are daring to hazard a guess on the favourites to win the coveted trophy though the MS Dhoni-led Chennai and Mumbai are in the forefront.Australian Doug Bollinger was candid in admitting that Mumbai and Bangalore teams were the toughest but did not rule out Kolkata Knight Riders or some other team from springing a surprise.

The run up to the fifth season saw the Sahara Group, owners of Pune Warriors India, pulling out and withdrawing its 11-year old sponsorship of the Indian team over certain grievances. However, the BCCI and Sahara Group reached a compromise after a series of hectic negotiations, enabling Pune to remain in the event.The auction of players for the fifth season was held in February in Bangalore where all-rounder Ravindra Jadeja was the biggest draw for the franchises with Super Kings grabbing him for a whopping Rs 9.72 crore.

Several players have also swapped teams, notable among them is former India captain Sourav Ganguly, who has moved to Pune Warriors from Kolkata Knight Riders and Rahul Dravid, who has retired from international cricket, switching over to Rajasthan Royals from Royal Challengers Bangalore. Another veteran VVS Laxman remained unsold.  – Khaleejnews