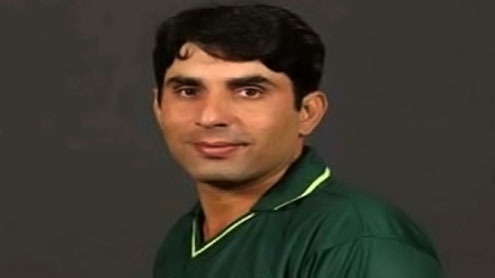 Pakistan needed six runs for victory on the last ball and Misbah was on strike He played across the line and was bowled out thus England take away the series by defending 130 runs target successfully.Misbah scored 28 runs off 32 balls laced with two boundaries. Pakistan off to a bad start while chasing 130 runs as they lost Hafeez in the first over.

Awais Zia and Asad Shafiq gathered 47 runs for the second wicket and Awais was adjudged lbw on his personal score of 23 runs of 28 balls with one four and a six.Umar Akmal scored 22 runs including a boundary. With 13 needed off the final over Shahid Afridi took a couple before he was run out while taking a second off the next.

The next three balls produced singles and a wide and with six needed off the final ball, Misbah was bowled.Broad dismissed a well set Umar Akmal (22) off the third ball of the penultimate over and gave away just four runs, leaving Jade Dernbach to defend 13 in the last, which he successfully did, removing Misbah (28) off the final delivery. Dernbach finished with 2-24 and most importantly gave World Twenty20 champions an unexpected win.

English make-shift opener Kevin Pietersen saved England from total collapse with an unbeaten knock of 62 to help team post 129 for six. Kevin Pietersen and Kieswetter opened the innings for England after skipper Stuart Broad won the toss and decided to first use of wicket in the series decider Twenty20.They were well on way to post a big total as they collected 53 runs in the first six overs. But after the departure of Kieswetter who scored 17 at the same number of deliveries including one boundary and one six Pakistan spinner Saeed Ajmal got his rhythm and did not allow any batsmen to settle on a slow track.

KP played superb unbeaten knock of 62 runs after facing 52 balls including six four and one six. Saeed was pick of the bowlers who chipped in with four wickets for 23 runs in his four overs while Aizaz Cheema took one wicket for 25 runs. The total was achievable but Pakistani batsmen could not play sensibly to lose the Twenty20 series.