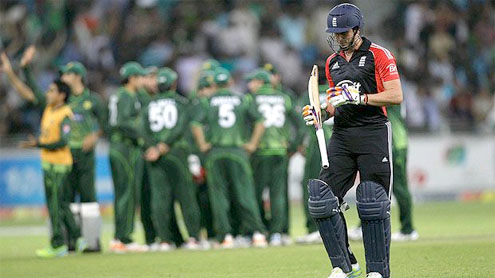 Umar Gul and Saeed Ajmal bowled superbly at the death to inspire Pakistan to an eight-run victory over England in the first Twenty20 international in Dubai on Thursday.

World champions England looked to be cruising to a target of 145 following a quickfire 33 from the in-form Kevin Pietersen and Ravi Bopara’s 39 but man-of-the-match Gul dismissed Jos Buttler and Samit Patel with successive deliveries in the 18th over to give Pakistan hope.Ajmal then bowled a brilliant 19th over of the innings, conceding just four runs, to put Pakistan on the brink of victory with England needing 18 off the last six balls.

Jonny Bairstow and Graeme Swann were unable find the boundary off Junaid Khan’s final over and managed just nine runs.Pakistan, beaten 4-0 in the 50-over one-day series, would clinch the three-match Twenty20 series with victory in the second game in Dubai on Saturday.England won the toss but Pakistan raced to 36 runs in the first three overs before losing wickets at regular intervals as the scoring rate slowed.

Captain Misbah-ul-Haq struck a huge six in his unbeaten 26 off 26 balls and Shoaib Malik made 39 but Swann completed figures of three for 13 from four miserly overs to restrict Pakistan to 144 for six.Pietersen, confident following consecutive centuries in the one-day series, struck 13 runs off the first four balls of the England innings and raced to 33 off 21 deliveries before he was brilliantly caught on the leg-side boundary by Asad Shafiq trying to hit his second six.Bopara made a fluent 39 to put England in control of their chase but Gul returned to dismiss him, Buttler and Patel in rapid succession. – Arabnews