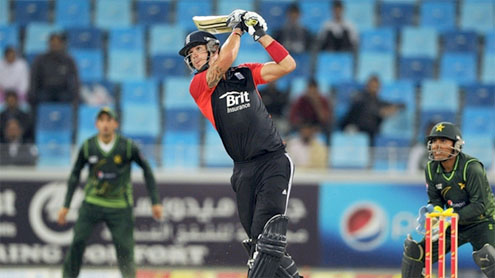 Pietersen (130), without an ODI century for more than three years before his unbeaten 111 three days ago, repeated the dose for a career-best in another run chase under lights.The outcome was in doubt for much longer this time, after a rare failure from Alastair Cook immediately put England’s pursuit of 237 all out on the back foot.But Pietersen appeared in control throughout in a 153-ball innings, which contained 12 fours and two sixes, as England got the job done with four balls to spare at the Dubai International Cricket Stadium.

He established a scoring rate that kept England ahead of the game, even from a precarious 68 for four after 16 overs, to the extent that Pietersen and Craig Kieswetter’s fifth-wicket stand of 109 did not have to feature undue risks against Pakistan’s spinners. The whitewash, England’s first against Pakistan for 25 years, was compensation of sorts for the 3-0 Test series drubbing these opponents inflicted on them here this winter.

It will not be enough for a rankings rise from fifth in the International Cricket Council table.But there was still reason for satisfaction, as Pietersen and Kieswetter kept England on track after Jade Dernbach’s four for 45 had helped to restrict Pakistan.England lost captain Cook to the second ball of the innings, lbw to Junaid Khan after DRS overturned an initial not-out verdict to a quick and full ball.Cook, on the back of two hundreds and an 80 in his last three attempts, began with a square-cut for four first ball.

But with him gone, Pietersen soon lost Jonathan Trott too, to an attempted paddle-pull at Abdur Rehman which looped into the leg side for a simple catch.Eoin Morgan was lbw sweeping at Saeed Ajmal (three for 62), and debutant Jos Buttler fell to the off-spinner for a second-ball duck – caught at short-leg off the shoulder of a defensive bat.

Pietersen and Kieswetter kept their nerve, though, and demonstrated plenty of skill too against a spin-dominated attack on a used pitch.Pietersen’s one significant scrape came when he had to resort to DRS to disprove another lbw verdict, this time on the basis that – albeit playing a hapless and uncomfortable sweep at Rehman – he had achieved the basic prerequisite of positioning his front pad outside the line of off-stump on impact.

Little went right, in fact, for Pakistan as their fielding let them down again – and England’s two South Africa-born batsmen swept and drove them to shreds.After Kieswetter was run out, scampering back in vain from a faulty attempt at a single, Pietersen muscled some crucial pulls too in a stand of 59 with Samit Patel until he was last out – chipping Ajmal to point with only two runs needed.Asad Shafiq (65) and Azhar Ali (58) had earlier ensured Pakistan recovered from their own early setback, the dismissal of opener Mohammad Hafeez with just one run on the board after Misbah-ul-Haq had won the toss.

Dernbach struck with only his second delivery, finding the edge to see off Hafeez caught behind, and took two tail-end wickets in his last three balls as England bowled Pakistan out for the fourth successive time.Yet Shafiq and Azhar soon found boundaries, and strike rotation, easy in a partnership of 111.The second-wicket pair shared 11 fours in a passage of play interrupted only when Shafiq chopped on, trying to cut Tim Bresnan.

That was the fit-again Yorkshire seamer’s first international wicket of 2012, and debutant Danny Briggs had the first of his career when Umar Akmal mistimed straight to long-off.Dernbach was the catcher, and was soon back in the last column too – with a good delivery which held its line off the pitch and saw Azhar squirt a thick edge to the diving Morgan at point.Pakistan had to rebuild again, and in new batsmen Misbah and Shoaib Malik they had the wise heads to do just that.

When Misbah clipped Patel past midwicket, it was for Pakistan’s first four in 50 balls. But he and Shoaib still gathered a run-a-ball momentum, and Misbah went up the wicket to hoist Patel over long-on for six to bring up the 200 in the 43rd over.Briggs proved the merit of his tight lines and full length when he had Shoaib lbw sweeping, to end a stand of 58, and England had the best of the last 10 overs – which included six wickets and just 58 runs. – Thetelegraph