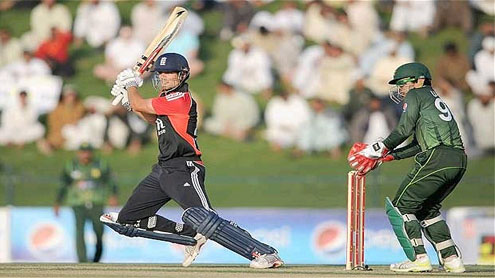 has exposed cracks in the Pakistan team, leaving England with an invincible 2-0 lead after their 20-run win in the second day-night match.

Pakistan, who blanked England 3-0 in the preceding Test series, looked disjointed in the first two matches and now need to win the remaining two on Saturday and Tuesday, both in Dubai.Pakistan failed to chase a target of 261 in the first match and 251 in the second – defeats which saw captain Misbahul Haq and coach Mohsin Khan avoid the mandatory post-match news conferences.

Asked why the captain and coach did not attend, opener Mohammad Hafeez said: “When you do well and even when you don’t do well, you have to face the media. It is not that nobody wants to face the media.”England rode on a second successive hundred by Cook – the first England captain to hit back-to-back centuries in one-day cricket – to post a challenging 250-4 on Wednesday before Steven Finn (4-34) restricted Pakistan to 230 in 49 overs.Cook had scored his best one-day score of 137 while Finn had identical figures in England’s big 130-run win in the first match in Abu Dhabi on Monday.

Hafeez gave credit to England.“The ball was seaming more and was spinning a bit more later. England bowled really well. It became a bit difficult batting second under lights,” said Hafeez, accepting Pakistan could not carry the Test win momentum.“Definitely, we were thinking at coming harder in the one-dayers as well. Credit goes to the England team. They really played good cricket. And Cook played a solid knock in the last two ODIs.

“We can still come back very hard because we believe in our team. We have too many match winners in our side and anybody can come in and win the game for Pakistan,” said Hafeez who scored only five and 26 in two defeats.Cook said England were not going get complacent despite their wins.“You train like it’s still 0-0. Complacency has never been an issue with this England side, whether we win or lose games of cricket.

“It will never be easy, but it’s a great situation to be in – 2-0 up with two to go,” said Cook, adding he had transformed after being written off as one-day player.“When I’d played those first 20-odd games, I knew if I wanted to play one-day cricket for England I’d have to improve. I’ve changed the way I play one-day cricket,” said Cook, who was made one-day captain in May last year.Wednesday’s hundred was his third as captain following a 119 against Sri Lanka at Lord’s last year.

Cook was full of praised for Finn.“He was our outstanding performer in India, and never really got the wickets he deserved,” said Cook of England’s 5-0 one-day defeat in India last year.“He’s got two ‘four-fors’ – and that opening spell of five overs for six was quality, running in and bowling 90mph and landing it on a sixpence.”Both teams play three Twenty20 internationals in Dubai (February 23 and 25) and in Abu Dhabi (February 27).