by top3
in Cricket
1 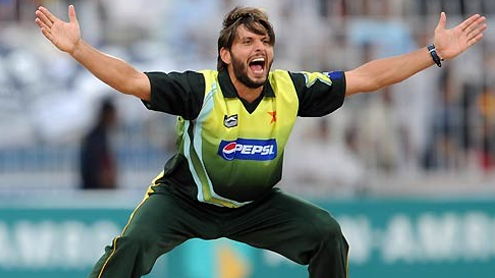 Younis Khan played an aggressive knock of 70 runs to help Pakistan register seven wicket victory against Afghanistan in the first ODI played between the two neighbours at Sharjah Cricket Stadium.

Pakistan’s winning spree continued as they lifted MMA Cup in Sharjah after Test series clean sweep against world’s top Test side England in Dubai.Earlier, Afridi once again proved he is one the most difficult bowler to score against. He grabbed 5-36 to restrict Afghanistan to 195. It was his eighth 5-wicket haul in one-day internationals.Pakistan started the chase cautiously as Mohammed Hafeez departed after scoring only 8 runs. Imran Farhat was dropped in 19th over when he was on 34.Farhat reached his 50 in 62 balls. It was his 11th 50 in ODIs. He departed after scoring 52 runs and was caught and bowled by Samiullah Shinwari.

Younis and Misbah-ul-Haq (40) took Pakistan to victory.It was a big day for Afghanistan cricket when they played their first ever one-day international game against a full member ICC side.After winning the toss, Afghanistan were off to a good start as Karim Sadiq and Noor Ali showed no signs of nervousness of playing against a team like Pakistan.They lost the first wicket in the fifth over when Noor was caught and bowled by Umar Gul.The fall of wicket put breaks on the scoring rate and now Shahzad and Sadiq started building the innings. The match was started in a very lively atmosphere as Afghan spectators were all over the ground. A large number of fans came from Afghanistan to watch their team playing against Pakistan.

It shows that how much passion and enthusiasm Afghans have for the game.Sadiq got a life in 6th over when Younis Khan dropped him off the bowling of Gul. He took full advantage of the miss by Pakistan and helped Afghanistan reach 50 in ninth over.Saeed Ajmal was introduced in the 8th over and was welcomed by a six by Shahzad at the cover boundary.Afridi came to bowl in 9th over and tasted immediate success by removing dangerous Shahzad.Afridi again struck in the 14th over when he bowled Afghanistan captain Nowroz Mangal as he went for an expansive drive and exposed his wickets. Sadiq on the other hand continued his brilliant work . He hit a massive six against the bowling of Mohammed Hafeez in the 15th over.

Shapoor Zadran not out 2

Younis Khan not out 70