by ToP
in Cricket
2 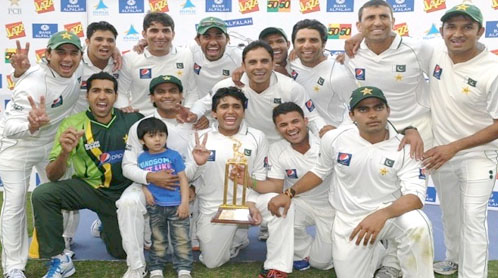 Mecca is about 1,000 miles south-west of the Dubai International Cricket Stadium but it was to that place that several of Pakistan’s players turned upon completing one of the most amazing Test match victories, and whitewashes, in cricket history.

To win the first two Tests against the world’s No 1 Test side would have defied sporting logic enough but to win this one, after making fewer than 100 runs in the first innings, hasn’t been done since 1907, when England beat South Africa having made 76 batting first. When that sort of thing happens, it does not take much to believe in a higher force, even if the celebration was delayed while Monty Panesar, England’s last man standing, reviewed his lbw against Abdur Rehman.

As bad as England have been here, Pakistan have been excellent. Under Misbah-ul-Haq and coach Mohsin Khan they have been transformed, a remarkable feat considering that just over a year ago the team were discredited and in disarray after three of their players were caught spot-fixing during the Lord’s Test.

To slightly misquote Margaret Thatcher, Misbah and Mohsin have brought harmony from discord and renewed pride from disgrace, the pair’s legend assured after securing Pakistan’s first clean sweep over England. This series has certainly been one of growing disbelief for those who have watched England’s progress over the past 18 months, as they ascended the summit of the Test match rankings. Only confirmed pessimists would have foreseen this kind of wreckage against a team of cricketing nomads with just a few wins against disenchanted opposition to their names.

In hindsight, especially after England’s poor one-day showing in India and the sketchy form of their middle order in the warm-up games here, the warning signs were there, though England failed to pay heed until it was too late. With two more Test series in Asia this year, England’s batting against spin, both naive and confused against Rehman and Saeed Ajmal here, needs to make serious improvements, otherwise they won’t be No 1 at the end of the year. In fact, South Africa could now topple them by April 1, should Graeme Smith’s team manage a clean sweep over New Zealand next month.

As hapless as England’s top order were against them, Ajmal and Rehman, with 24 and 19 wickets respectively, were relentlessly superb on pitches that suited their brisk spinning to perfection. With Mohammad Hafeez to chip in, mainly when the ball was still new, spin claimed 48 of England’s 60 wickets to fall over the series, the most ever by spinners for Pakistan. Not that the pace bowlers were entirely redundant, Umar Gul once more revealing his class yesterday, with four for 61.

Given the tweakers’ dominance throughout the series, England would have begun yesterday more in hope than expectation, as they chased the remaining 288 runs needed to avoid the ignominy of losing 3-0. On a wearing pitch danger was everywhere, though when Adnan Akmal dropped Strauss off Gul, England’s supporters rallied, as if sensing a potential upset.

The miss did not prove expensive, Strauss falling lbw to Rehman a few balls later. He reviewed the decision, something of a luxury as he was beaten playing back, and Cook should have been more honest with his captain given the value of reviews when spinners are bowling.

Pakistan fluffed another straightforward chance soon after, this time from Cook, Gul barely laying hands on the top-edge sweep down at deep square leg. Not long after, Cook drew Pakistan into using up their last review as he swept at Ajmal, though when Jonathan Trott tried the shot he skied the ball to Rehman, who showed his butter-fingered team-mates just how it is done.

With memories of their inertia at Abu Dhabi still haunting them, Cook and Kevin Pietersen played a few shots after lunch, Pietersen lofting Rehman for four and six in the space of three balls. But while nobody denies Pietersen’s class when attacking, his defence is riddled with insecurity, something Ajmal cannily exploited soon after when he spun one through the gate.

As the first part of England’s malfunctioning middle order, Pietersen’s departure has normally precipitated a collapse that has led Ian Bell and Eoin Morgan to follow soon after. Yesterday, though, Cook broke the fall, the victim as much to Younis Khan’s brilliant, flying catch at slip, as to the closed bat face that got it there.

Actually Morgan batted with some flair, his feet moving better against Ajmal and Rehman than at any other time in the series. Boundaries flowed, including a six, but his sudden fluency was not transferred to Bell, who looked stuck in quicksand until a horrible poke to cover off Gul ended his predicament.

This was England’s first Test series since 1921 in which none of the top six have averaged over 30, though none made poorer reading than the middle order of Morgan (13.66), Pietersen (11.16) and Bell (8.5). Over the three Tests only five batsmen passed 50 and you cannot expect to win much when that happens, irrespective of how good your bowling attack was, and England’s was excellent here.

Actually, the bowlers were not that bad with the bat either, the last four wickets, shepherded by Matt Prior, contributing 93 runs for the last four wickets. It was Gul, with the second new ball, who began to shift them, Stuart Broad and Graeme Swann, both caught playing aggressive shots.

Fittingly, spin returned to claim the last two wickets and, with Panesar’s dismissal, the 43rd lbw of the series. That equals the number for a five and six-match series but this was a huge number over three. With the Decision Review System poised to deliver its cold-eyed judgment, they came thick and fast, something England’s batsmen never came to terms with.

Madonna steals the show at the Superbowl in Givenchy