by top3
in Cricket
3 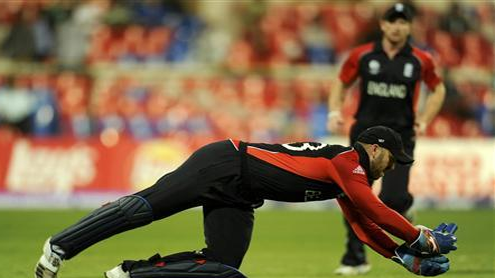 England were left needing an improbable 288 runs to obtain an unlikely victory against Pakistan at the Dubai International Cricket Stadium here after the third day’s play on Sunday.

Azhar Ali (157) top scored for the home side as they got up to 365 all out in their second stint at the crease, leaving Andrew Strauss’ tourists needing 324 for victory – a requirement that was whittled down at the end of this five-day match’s ninth session by an unbroken stand of 36 between Strauss (19no) and Alastair Cook (15no).Resuming on 222-2 and an overnight lead of 180, Pakistan studiously went about batting England out of contention with the well-set duo of Azhar Ali and Younus Khan out in the middle.They had added 20 runs to their unbeaten, third-wicket partnership of 194 when Ali – on 84 – edged James Anderson to Graeme Swann, who just couldn’t scoop up the catch close to the turf at second slip.

Two further runs later though on the scoreboard and centurion Khan (127) finally fell LBW to Stuart Broad.Khan duly called for a second opinion from DRS and – despite Hawk-eye replays showing Broad’s delivery clipping the very top of the off-stump bail – the harsh verdict came back ‘Umpire’s call,’ so Khan had to walk.Nonetheless, he and Ali had put Pakistan ahead by 202 courtesy of their 216-run stand and the latter went on to notch his own ton (102no off 319 balls, including five fours and one six) with patient persistence.At lunch, Pakistan had reached 295-3 – 253 in front of England – with Ali on 115no and his captain Misbah-ul-Haq 16no.Thereafter, both starlet and skipper edged their team closer to a 300-run cushion and were 11 shy of that target when Misbah (31) was trapped in front by Monty Panesar.

Misbah called for a DRS referral, which ultimately proved unsuccessful, and his dismissal sparked a brisk collapse as four other batsmen were removed in the space of 19 runs overall.Panesar accounted for Asad Shafiq (5) via the same method as Misbah, while he also dislodged the clean-bowled Adnan Akmal (0) for a seven-ball duck.Swann and Anderson then combined to oust Abdur Rehman (1) and Saeed Ajmal (1) cheaply and Pakistan had slumped from 331-4 to 350-8.Ajmal’s demise heralded tea, where Pakistan still led by 308 at 350-8, and they amassed 15 more runs with their two remaining wickets afterwards.Ali flicked Swann to Cook at short leg before Umar Gul (4) became Panesar’s fourth LBW victim of Pakistan’s second innings.

Pakistan had reached 365ao – in spite of losing their last seven batsmen for 34 runs – and set England a run chase of 324 to win, which would be their second-highest ever if they were to achieve it on Monday and Tuesday.In reply, England’s openers received scares late on; Cook being dropped on four by Umar Taufeeq off Gul, whereas Strauss survived a DRS appeal for LBW by spinner Mohammad Hafeez. – Khaleejtimes