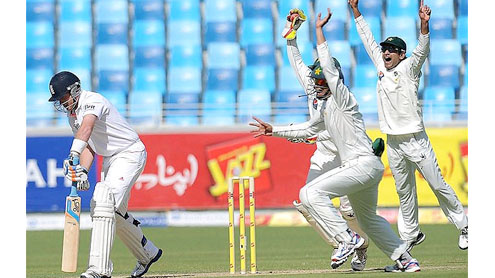 Pakistan and England face each other in the first of the three-Test series starting from Tuesday in their first encounter since the 2010 spot fixing scandal which shook the cricketing world.

The new-look Pakistan side led by Misbah-ul-Haq has tasted success against a number of teams in last two years but they face a real test in this series against the world’s top Test side.If they succeed in drawing or winning the series against the visitors it will a proof that Pakistan have made some real progress during the last few months.

Misbah — labelled by many as a defensive captain — has brought many positives to this unpredictable but talented side as a captain. His calm and cool demeanour has brought stability on and off the field. Once Marvan Attapatu while talking to Khaleej Times said that Misbah is doing to Pakistan what Arjuna Ranatunga did to Sri Lanka in 90s.Batting will be a main concern for Pakistan as they need to see through James Anderson, Chris Tremlett, Stuart Broad and Graeme Swann. They have done well in the recent past but England have got the best bowling combination in Test cricket.

Younis Khan and Misbah provide the necessary experience in the middle order and have been Pakistan’s best batsmen against pace and spin.Hafeez, who has tasted success as an opener, will be partnered by Taufeeq Umar, who scored his maiden double-century against Sri Lanka recently. While ever-improving Azhar Ali and old horse Taufeeq Umar have been more solid, the aggressive Umar Akmal and dependable Mohammad Hafeez can provide the momentum in the latter stages for Pakistan.

If Pakistan put enough runs on the board, they have got the bowlers who have the ability to take 20 wickets and can make a big difference in the forthcoming series.Umar Gul is relishing his new role as an opening bowler and fit-again Junaid Khan and Aizaz Cheema and Wahab Riaz have got the potential to take wickets against any batting side in the world.Pakistan’s spin attack has also done well in the UAE.

Ajmal, who took the most Test wickets (50) in 2011, declared last month that he will unveil a mystery delivery against England and Hafeez said on Sunday that he has played that delivery in the nets and found it quite different.On the other hand England’s strong recent form and all-round strength gives them the edge going into their first neutral Test series against a resurgent Pakistan side.England’s pace attack suffered a blow with the injury to Tim Bresnan but it is still potent enough to trouble the best batsmen in the world. James Anderson and Stuart Broad were excellent in England and will aim to be as successful in the subcontinent.

England have won both the warm-up games in Dubai which will be a great boost for them.After Bresnan’s exit, Broad is carrying a minor injury. He bowled during the practice on Monday but not at full throttle.There are chances that England may make room for Monty Panesar and Graeme Swann in the Tests.Since Panesar has outshined Swann in the practice games, the latter is in favour of playing two spinners.England have an edge over Pakistan as far as batting is concerned. Alastair Cook, who scored a century against Pakistan Cricket Board XI in the practice match, has been solid against both pace and spin.

Andrew Strauss has not scored a century in 15 innings since his ton in Brisbane but he will be a tough nut to crack for Pakistan. England will be a little bit worried as Kevin Pietersen’s struggle against spinners continues and Ajmal and Abdul Rehman will be a constant threat for him. Ian Bell and Jonathan Trott have been the single biggest difference between England and the other teams. They are the backbone of England batting and they always performed when the team needed them.Pakistan have to play to their potential and they need to be consistent if they harbour any hopes of beating England in the UAE. – Kahleejnews