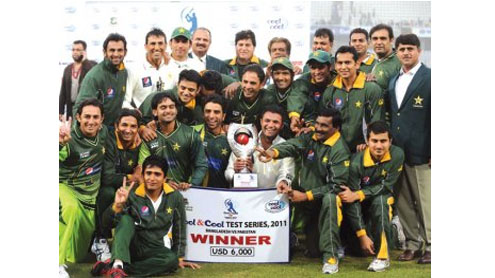 DHAKA: Abdur Rehman claimed 4-51 as Pakistan posted a seven-wicket victory over Bangladesh in the second and final cricket Test in Dhaka on Wednesday to make a clean sweep of the series.

Pakistan, who won the first Test in Chittagong by an innings and 184 runs, achieved their 103-run victory target off just 20.5 overs in the last session of the fifth day’s play at the Sher-e-Bangla stadium.Opener Hafeez smashed a 52-ball 47 and Azhar Ali contributed 34, before skipper Misbah-ul-Haq finished the match with a six over long-off against Elias Sunny. “We were pushing to get home quickly as the light could have faded any moment,” said Misbah.

“This Pakistan team has been playing for nearly one-and-a-half years and at the moment we are an experienced side. Everybody is learning how to play Tests and that’s the key to success.”They (Bangladesh) gave us a tough time, especially in the first innings when they built a good partnership. They also made it difficult for us to score runs, but they will have to be consistent in batting and bowling.”

Bangladesh, trailing by 132 runs after the first innings, had been comfortably placed at 212-5 in their second innings but collapsed to 234, with left-arm spinner Rehman taking three wickets and off-spinner Saeed Ajmal two. Rehman’s four-wicket haul was his best in 12 Tests.Nasir Hossain (79) and skipper Mushfiqur Rahim (53) defied the Pakistani attack for more than a session, adding 117 for the sixth wicket before falling in the space of nine runs. Rehman removed both the well-set batsmen in four overs before accounting for Shahadat Hossain (one) in the afternoon session.

Nasir, a 20-year-old playing only his fourth Test, cracked 11 fours in his maiden half-century before being bowled by Rehman. Rahim hit seven boundaries in his ninth Test half-century. Rahim reached his half-century when he swept Rehman for a four, but soon lost his patience, stepping out to attempt a lofted shot off the spinner to be caught by Ajmal at mid-off.”I regret the way I got out and I feel guilty for that. Had I not got out we might have batted another half an hour and put some more runs on the board,” said Rahim.” – Nation