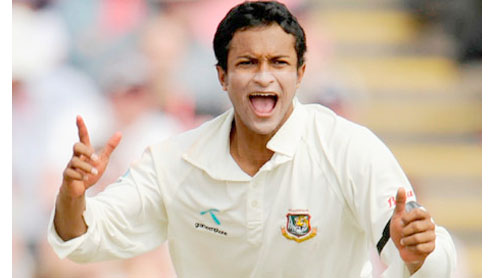 Shakib Al Hasan became the first Bangladeshi to hit a century and take five wickets in an innings in the same test but Pakistan seized control of the 2nd test.

All-rounder Shakib followed his first-innings 144 with the bat by snapping up six for 82 with the ball as the hosts bowled out Pakistan, already 1-0 up in the two-match series, for 470 on the fourth day on Tuesday.However, pacemen Umar Gul and Aizaz Cheema then claimed two wickets apiece as Bangladesh limped to 114 for five in their second innings, trailing the visitors by 18 runs overall.Nasir Hossain (30) and Mushfiqur Rahim (seven) were still at the crease when bad light ended play for the day.

“Shakib’s performance was great,” Pakistan all-rounder Mohammad Hafeez told a news conference.“That was something special. He bowled really well after scoring the hundred. I praise him because he is doing a wonderful job for Bangladesh.”Pakistan captain Misbah-ul-Haq made his 14th test half-century before he became Shakib’s first victim of the day, caught at slip by Mahmudullah for 70.Asad Shafiq was next to go, leg before for 42 after being deceived by a swinging ball from Robiul Islam.

Shakib then had Abdur Rehman (24) caught by Mahmudullah before Gul (11) top-edged a delivery from the slow left-armer to Elias Sunny at mid-on.Saeed Ajmal went for a duck three balls later, bowled by Shakib, and Adnan Akmal was stumped by Mushfiqur for 53 in the spinner’s next over.Bangladesh coach Stuart Law was unhappy his side dropped six catches though.“That is an area of concern for us,” said Australian Law. “You’ll never take every catch that comes your way but for the easy ones we have to be switched on.

“When you’re dropping good players you’re giving them two chances. There’s no excuse, there are no 38-year-olds running around for us out there.”Bangladesh’s relief at taking all 10 Pakistan wickets subsided quickly when Gul struck twice in two balls before tea to reduce the home side to 24 for two.

Gul had Tamim Iqbal caught by Misbah at first slip for 21 although video replays suggested the ball might have hit the opener on his helmet.The paceman then trapped Shahriar Nafees leg before for a duck.Rehman bowled Nazimuddin for 12 before Cheema dismissed Mahmudullah (32) and Shakib (six).

Aizaz Cheema not out 1

Nasir Hossain not out 30

Mushfiqur Rahim not out 7